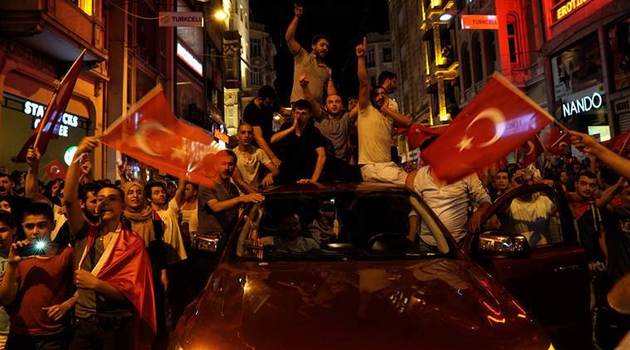 History shows that democracies are stable, enduring and well-functioning if they’re earned through civilian struggle, not through a foreign intervention or military takeover.

In outer facade of the Turkish Parliament building, a symbol of Turkey’s democracy and national unity, there lies a hall scarred by air strikes on July 15, the night of the failed coup attempt.

Experts are still scratching their heads to understand why on earth coup plotters would attack the Parliament, or occupy a bridge, for that matter. How was the military “saving” the nation from despotism when its first act was to bomb the very institution that symbolized Turkey’s democracy since the Ottoman era? Bombing the Parliament after the coup attempt started to crumble on that night raises another set of questions, too.

No one knows why the Parliament was bombed, except arguing that the soldiers on that night were so barbaric that they swore to destroy the country. How did coup plotters expect to rule the country and promise a freer society after bombing the national assembly? There are still many questions that need to be addressed.

For one, anyone who was following what had been going on in Turkey before the coup knows that Turkish leaders buried democracy a long time ago. On July 15, we did not confront the military to “save democracy”, but to “save civilian politics.”As I repeatedly made clear in the past, there was no prospect that the military could have restored freedoms and civil liberties once it took over. We need to battle authoritarian practices on a civilian plateau. History shows that democracies are stable, enduring and well-functioning if they’re earned through civilian struggle, not through a foreign intervention or military takeover. Tunisia and Libya are two striking examples.

Since Turkey has become a multi-party democracy in 1950, the single most important factor that undermined Turkish democracy was the military. Besides its several interventions in almost every ten years, the army was also crucial in re-writing Turkey’s laws, designing the judiciary in line with its wishes and engineering a civil society and the media that was sympathetic to its goals. The military was an untouchable institution. It was above and beyond politics. And no matter what it did, Turks held it dearly.

Because the last military intervention in 1997 targeted the conservative government of Necmettin Erbakan, Islamists had this idea that their struggle for power was also a struggle for democracy. For them, democracy came to represent the rule of conservative people and their empowerment. And because they were in majority, they were free to re-fashion the country, the argument was made.

Since the army’s intervention in 1997, the “fight for democracy” was largely focused on curbing the role of military in politics. For this reason, the AKP government started an accession process with the EU. The military was then purged with a series of sham coup trials. And the 2010 constitutional referendum effectively ended the military’s influence in judiciary.

But as the military’s power waned from politics, Erdogan’s desire to become a more powerful leader eclipsed the prospect to become a full-fledged, consolidated democracy. Erdogan, long champion of the underdog, has now become a celebrated autocrat.

On July 15, Turkey was no longer a democracy to be saved. True, it would even be worse if the military successfully took over the government. The failure of the military on July 15 was a welcoming development for Turkish civilian politics, a historic one. But it was far from saving the Turkish democracy, which did not exist on July 15 anyway.

When the Western media focused on the post-coup crackdown rather than the success to thwart the military, Turkish officials were furious. Even adversaries of Erdogan, who loathe Gulenists even more, did not focus on the post-coup purge. It was a rare chance to get rid of Gulenists, alleged mastermind of the July 15 coup.

For the Turkish opposition, highlighting gross human rights abuses in the aftermath of the coup meant to undermine the government’s relentless drive to root out the Gulenists. This is the story of how the entire Turkish society turned a blind eye to the purge and arrest of tens of thousands of people, most of whom are ordinary teachers, without any due process.

There is no doubt that the selective crackdown in Turkey will widen to include other critics of the government. This is not surprising since the failed coup attempt became carte blanche for the government to do whatever it wants. Perhaps Turkish people sent the military to their barracks for good. But building a consolidated democracy with the rule of law is a completely separate matter.