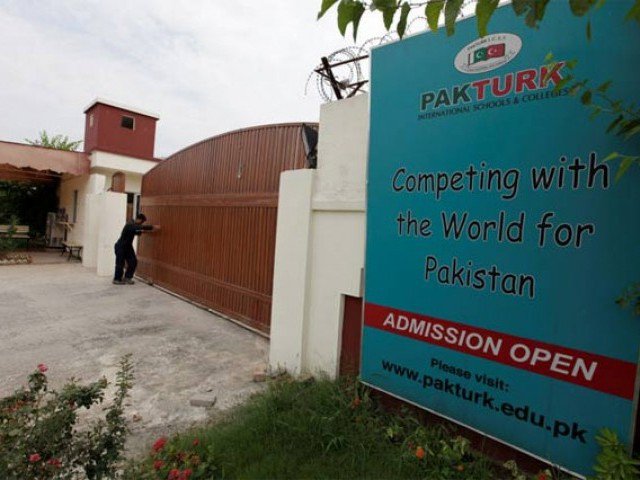 ISLAMABAD: Parents of students studying at the Pak-Turk International Schools and Colleges have censured the government for handing over the school system to a non-profit organisation.

Expressing their apprehension at a press conference at the National Press Club on Saturday, the parents said that the NGO, Maarif Foundation, lacks competence and the required experience to run educational institutions.

They also raised questions on the alleged funding which the organisation receives from Saudi Arabia, fearing it may introduce extremist thinking in educational institutions.

The government had in November 2016 asked over 400 Turkish faculty and administrative staff, managing the Pak-Turk Schools in the country, to leave Pakistan within a week, following pressure from the Turkish government in the wake of a failed coup attempt in Turkey on July 15.

Subsequently, the government handed over management of the schools to the Turkish non-profit Maarif Foundation – reportedly funded by Saudi Arabia and the Islamic Development Bank.

The Turkish government believes that the schools had been established by the Gülen movement, which is inspired by the views of US-based Turkish scholar Fethullah Gülen. Ankara blames him for orchestrating the coup attempt.

Pak-Turk schools and colleges teach about 13,000 students in 10 cities and deny any affiliation with the Gülen movement.

Although the school management had challenged the decision of expelling staff in various courts and managed to secure some interim relief, they had to leave Pakistan in the end.

On Saturday, parents representing a parent-teacher association of the school said their children’s future was at stake due to politics.

“All the Turkish teachers and administrators have left Pakistan and the schools are being run by Pakistanis,” said one of the parents Syed Amir Abdullah.

He added that the government still seemed hell bent on ruining these institutions by handing them over to an ‘infamous organisation’ which has no experience of running them.

“Those teaching students are themselves learning English from the National University of Modern Languages,” Abdullah said, as he asked how such teachers would be able to teach a Cambridge-system syllabus to the students.

They also alleged that the Punjab government’s Counter Terrorism Department had been harassing the chairman of the Pak-Turk Foundation Alamgir Khan, and trying to force him to resign.

“The government, despite extensive scrutiny, had found nothing controversial in these institutions. Thus, it should reconsider its decision [of handing over management to Maarif Foundation] and should not hand over these institutions to an incompetent organisation,” the parents said.

Sajida Farhat, another concerned parent, said that students were quite attached with the current faculty and that any abrupt change in the setup would badly affect their academic activities at a time when exams are just around the corner.

Instead of ruining the already well-established institutions imparting impartial quality education, the government should take measures to uplift the standards of other government educational set ups, they asserted.