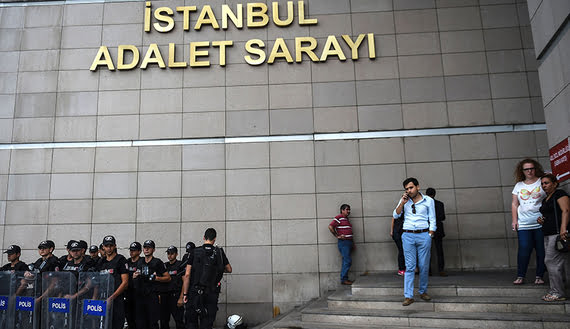 Turkish police stands guard in front of the Istanbul courthouse on July 20, 2016 following the military coup attempt of July 15. Turkish President Recep Tayyip Erdogan was today to chair a crunch security meeting in Ankara for the first time since the failed coup, with tens of thousands either detained or sacked from their jobs in a widening purge. / AFP / BULENT KILIC (Photo credit should read BULENT KILIC/AFP/Getty Images)

Many legal experts now believe that thousands, if not tens of thousands, of Turks are potentially in a similar situation in the wake of the July 15 bloody coup attempt. According to officials from the ruling Justice and Development Party (AKP), 70,000 public servants were dismissed in less than two months after the putsch, while some estimate the figure is more than 100,000. Among them, thousands remain in police custody or have been imprisoned pending trial, but the overwhelming majority of those remaining have not yet faced any questioning related to their dismissals.

Kerem Altiparmak, an Ankara University scholar specializing in human rights, believes a public sector purge on such a scale “is perhaps unprecedented in the world.”

“We are speaking here of tens of thousands people — more than 100,000 people ousted from public service. I’m not sure whether it had reached such numbers even in the entire Eastern European bloc” after the Iron Curtain collapsed, Altiparmak told Al-Monitor.

The Economist recently wrote that “the crackdown resembles a witch-hunt, far bigger than Senator Joe McCarthy’s purge of suspected communists in America in the 1950s.”

In the chaotic days after the coup attempt, which claimed more than 240 lives and left thousands injured, the AKP government repeatedly assured that no innocent people would be swept up in the crackdown on the putschists, who Ankara has branded the Fethullah Gulen Terror Organization (FETO). Yet President Recep Tayyip Erdogan declared Sept. 7 that “the horse’s traces had mixed with the dog’s traces” — a Turkish phrase that describes a serious confusion.

Following his statement, the government immediately announced that those who had been unfairly dismissed would be reinstated. Speaking at a meeting with governors in Ankara, Prime Minister Binali Yildirim ordered the creation of crisis desks in all of Turkey’s 81 provinces to review objections. In a separate meeting with the governors, Erdogan said, “I don’t want you to compete with each other on who gets more public servants dismissed. I want you to be fair.”

The same day, however, more than 11,000 teachers in the mainly Kurdish southeast, most of them members of a leftist trade union, were suspended for alleged collaboration with the armed Kurdistan Workers Party (PKK), casting doubt on the sincerity of the government’s mea culpa. Ever since the coup attempt, the government has claimed collusion between the leftist PKK and the religiously motivated FETO, but according to leftist trade unions, this was clearly a political operation.

The purge in the public sector is being carried out through legislative decrees, a tool made available under the three-month state of emergency declared days after the bungled putsch. The government has used two methods in the crackdown: dismissal and suspension. Those suspended stand a chance to return to their jobs after the investigations. But those dismissed “cannot be employed in or assigned — directly or indirectly — to public service again,” the legislative decrees stipulate.

According to Altiparmak, this provision effectively condemns the dismissed to lifelong unemployment. Expelled judges or law professors, for instance, cannot work as lawyers, and soldiers or police officers cannot provide private security services.

The problem, however, does not end there. Aziz Celik, a scholar of labor economics at Kocaeli University, says the dismissed are being socially stigmatized because their names are being published in the Official Gazette without any trials and convictions. “With the publicizing of their names, those people are being declared putschists or terrorists before the public. In other words, they are being blacklisted and left to die a ‘civil death,’” Celik told Al-Monitor.

According to the scholar, the purge has affected up to 500,000 people, counting in the families of the dismissed. “This is a very serious social trauma that could have other ramifications in the future,” he said, stressing that the dismissed were stigmatized along with their relatives and social circles and had their personal lives destroyed.

The main opposition Republican People’s Party (CHP) has said it will seek the cancellation of the legislative decrees at the Constitutional Court. CHP deputy and human rights lawyer Sezgin Tanrikulu believes government opponents unrelated to the coup attempt are being punished collectively and subjected to “social lynching” in the tense aftermath of the putsch. Ankara, in a sense, is creating a new internal enemy, he told Al-Monitor. “Turkey cannot afford this in this polarizing climate.”

The legislative decrees stipulate that the dismissed have no legal recourse to appeal. Many legal experts, however, disagree. Some even say the legislative decrees are unconstitutional and thus “null and void,” and call on the dismissed to petition administrative courts and then, if necessary, the Constitutional Court, as the normal procedure requires.

Altiparmak believes that no domestic recourse is possible because the emergency rule law exempts legislative decrees from the scope of constitutional objections, and thus the dismissed could go directly to the ECHR.

Earlier this month, Thorbjorn Jagland, the secretary-general of the Council of Europe, urged Ankara to produce clear evidence in pursuing participants in the putsch and “separate those who were clearly behind the coup and those who have been in some way or another connected to or working [in institutions run by] this so-called Gulen network.” Otherwise, he warned, Turkey may be challenged in the ECHR, which enforces the European Convention of Human Rights.

For many legal experts, this prospect is inevitable and thousands of “civil death” cases are potentially looming against Turkey at the ECHR. Referring to a Sept. 1 legislative decree, under which 41,000 people were dismissed, Altiparmak said, “If all 41,000 of them apply to the ECHR, all 41,000 of them will win, and the court will order Turkey to pay both material and moral compensation. We know from precedents that the court considers such expulsions from public service without fair trial as violations of the European Convention of Human Rights.”