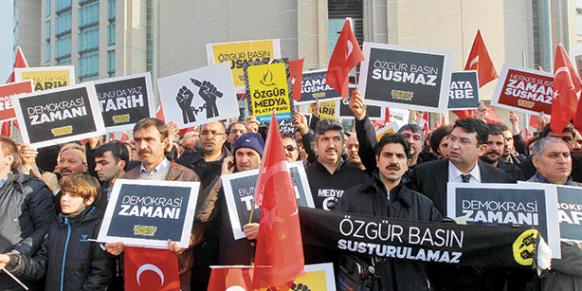 Supporters gather in front of the İstanbul Courthouse to protest raids that targeted Samanyolu TV and the Zaman daily on Dec. 14, 2014.(Photo: Today's Zaman, Turgut Engin)

The creation of false connections between these members and terrorist acts has been used to oppress and mistreat members of the movement. What’s more, schools run by members of the Gülen movement are forced to shut down, while trade organizations and businesses associated with the movement are subjected to unnecessary checks and controls as a form of harassment and sometimes shut down. At the same time, an enormous effort is underway to silence the media organs associated with the Gülen movement.

In the meantime, political leaders in Ankara point to a phantom “parallel structure” that it says it is struggling against and which it claims led an attempted “coup” against the elected leadership. Of course, despite the fact that a full 14 months have passed since assertions about this parallel structure and its attempted coup were first made, not a single piece of concrete evidence has been provided. For this reason, these assertions have found believers neither at home in Turkey nor outside the country; instead, they are viewed as simple sophistry on the part of the Ankara government. Despite a clear lack of individuals who actually believe the AKP claims, the government continues its efforts to use rhetoric of hatred to chip away at the efficacy of the Gülen movement, as well as the esteem it has garnered over the years.

There is no legal basis for any of the actions that have been taken against the Gülen movement thus far. In the legal realm, however, there is a phrase which aptly describes what has been happening in Turkey — “hate crime.” When there is a clear effort to use rhetoric to spread hatred and enmity against one particular person, organization or group, this meets the legal definition of a hate crime. The next level of crime in this category is a “crime against humanity.” Modern societies and modern legal systems are quick to condemn such crimes and their connected actions in the strongest terms.

Article 10 of the Turkish Constitution makes it clear that everyone deserves equal treatment before the law, regardless of language, race, ethnicity, religion, philosophy, sect and so on. Article 3 of the Turkish Penal Code (TCK) clarifies that the equality bestowed on everyone involved with the justice system as well as the laws must be protected to the highest degree.

Chapter 122 of the TCK provides some clarification about hate crimes: (1) When hatred based on political thought, philosophical ideas, or religious and/or sectarian differences occurs and a) when a person is sold, rented or given assets that belong to the public, b) when one person benefits from resources that belong to the public, c) when one person is hired for a certain job and d) when a person is prevented from being included in a possible economic activity; all of these are acts that must be punished.

Turkish Penal Code Chapter 216 about when masses are incited towards hatred or enmity specifies that (1) when someone incites one faction of the masses toward hatred against other factions of the masses based on different characteristics in religion, sect, language, ethnicity and so on thus creating a clear and present danger in security for said faction, (2) when someone uses the different characteristics of one faction of society to insult or belittle other factions, and (3) and when someone employs social differences to insult and belittle one faction of society, thus threatening public peace and safety; all these acts are punishable with prison time, and should be punished according to the law.

Hate crimes entered the agenda of the Organization of European Security and Cooperation (OESC) for the first time in 2003, when the Ministers Council met in Maastricht that year. According to the OESC, it is a hate crime when people are targeted on the basis of their race, ethnicity, religion, language, color, gender, sexuality and mental or physical status.

The victim in hate crimes is targeted for either actually being a member of a certain group, or at least being perceived as such. Possessions that are targeted for damage or destruction in hate crimes are also chosen for their associations or links with certain groups. A hate crime can include a physical attack, threats of violence, damage of possessions, speech or rhetoric that include racist or hate filled words, words written on walls or signs, emails, telephone calls, Twitter posts, certain content on other social media platforms, arson, brochures and aggressive behavior in the workplace or the school place.

What should those targeted by hate crimes do?

People victimized by hate crimes need to first pursue justice in their own country. If, however, this is not possible because of the insufficiency of the domestic justice system, they can seek redress with the European Court of Human Rights (ECtHR) in Strasbourg. It has been shown time and again that the most effective tools against hate crimes are the ECtHR regulations. One example of this was the ECtHR decision in the case of Pavel Ivanov v. Russia case (No. 35222/04). The court ruled that the members of one particular religious group could not be portrayed as inherent sources of evil or intrigue. There was a similar result in the case of Keza, Norwood v. UK (No. 23131/03), where it was decided that clear and open attempts to link one particular religious group with terrorism, in addition to rhetoric of hatred and enmity aimed at the group, were a clear threat to social peace and the basic tenets and values of society.

It is hateful rhetoric that lies at the core of hate crimes, while hate crimes lie at the core of crimes against humanity. The lines drawn between these arenas are very thin and one can easily be mistaken for, and slip into being, the other. Masses motivated by rhetoric of hatred and enmity can be motivated into inhumane acts against those labeled as the “other” by those propagating negative rhetoric. This is precisely what has happened in Turkey in the case of the Gülen movement.

Hate crime and crimes against humanity

Article 7 of the Rome Statute, defines crimes against humanity as those that target systematically and in a widespread fashion an entire civilian population. These are therefore crimes that violate international law and include unlawful imprisonment, torture and any tyranny or unlawful behavior that targets people in groups or society based on race, ethnicity, religion and so on. According to the International Court of Justice (ICJ) in the Hague, crimes against humanity do not necessarily need to occur during times of war. All that is necessary for these acts to be defined as crimes against humanity is that they include widespread and systematic acts against a civilian populace.

In the meantime, the ICJ is qualified to try a case when such a crime occurs in a country that has signed the Rome Statute. In this court, it is not the states themselves, but the individuals, who are tried. Individuals can arrive for trial before the ICJ three different ways.

* An ICJ prosecutor may start an investigation based on information provided by either the victim or the family.
* States that have signed the Rome Statute can apply to the ICJ when one or more such crimes are suspected.
* When the crime does not occur in a country that has signed the Rome Statute, the United Nations Security Council (UNSC) can go to the ICJ to seek justice and an investigation.

Turkey has not signed the Rome Statute, which may provide some with a sense of security when it comes to their own actions. But in the face of the aforementioned acts against members of the Gülen movement, organizations such as the European Parliament, the European Council and the EU have all made strongly worded condemnations of the actions taken by Ankara. Nearly 100 representatives from the US Congress signed a letter essentially warning Ankara to be more careful of its actions. And in the meantime, the esteem accorded to the Gülen movement for its own activities and the superior quality of education offered by its schools abroad has risen immeasurably recently.

Against this backdrop, recent international reports and analyses have signaled that not only does the purported support coming out of Ankara for the activities of the Islamic State of Iraq and the Levant (ISIL) in Syria deserve to be tried officially at the ICJ, but that there has been a steep and perilous slide backward in terms of basic rights and freedoms — and thus democracy — in Turkey. All of this reflects a decline in the esteem accorded to the ruling party in Ankara. Judging from all the signs, the coming days could herald worrisome new developments — especially in light of the three paths through which cases make their way to the ICJ — for certain circles in Turkey.

*Sami Karahan is a professor at Marmara University’s faculty of law.