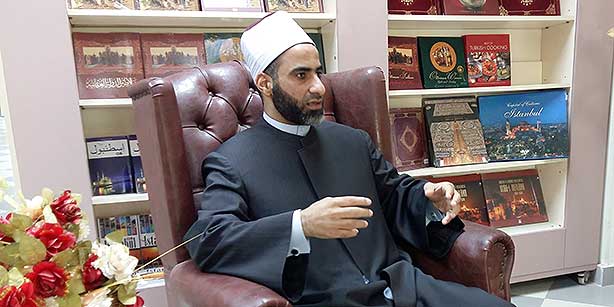 Speaking with Today’s Zaman in an exclusive interview in Cairo, Professor Sayyid Abd al-Bari said Gülen’s article published in the French daily Le Monde on Dec. 17 offers a list of solutions in the fight against terrorism. “Gülen courageously stands against the groups who use the name of Islam in their barbaric attacks,” he said.

“We must categorically condemn the ideology propagated by terrorists and instead promote a pluralistic mindset with clarity and confidence. After all, before our ethnic, national or religious identity comes our common humanity, which suffers a setback each time a barbaric act is committed,” Gülen said in his article.
Underlining that Gülen has always reminded Muslims that they have to follow the true and high moral principles of Islam, Abd al-Bari also noted that Gülen has always been against deviant thoughts and skewed interpretations in Islam.

According to Abd al-Bari, Gülen is a prominent contemporary Islamic scholar who shows maximum effort in favor of all humanity by his teachings under the guidance of the Prophet Muhammad teachings and tradition. “He analyses the problems in detail regarding his country, religion and humanity, in broad terms, which proves his intellectual prominence,” he added.

Abd al-Bari also expressed his agreement with Gülen on terrorist organizations such as the Islamic State in Iraq and the Levant (ISIL), as Gülen stated in the article that what the world is witnessing is not a clash of civilizations but rather the clash of humanity with barbarity in common civilization. He also advised all Muslims to pay attention to Gülen’s call against terrorism.

“Our responsibility as Muslim citizens is to be a part of the solution, despite our grievances. If we want to defend the life and civil liberties of Muslims around the world and the peace and tranquility of every human, regardless of their faith, we must act now to tackle the violent extremism problem in all its dimensions: political, economic, social and religious. By setting virtuous examples through our lives, by discrediting and marginalizing the extremist interpretations of religious sources, by staying vigilant toward their impact on our youth, and by incorporating democratic values early in education, we can counter violence and terrorism as well as totalitarian ideologies that lead to them,” Gülen said in Le Monde.

In a strongly worded statement on Nov. 14, Gülen had also condemned the terrorist attacks in Paris the previous day that claimed the lives of over 100 people, calling on everyone to join in rejecting terrorism “without ifs and without buts.”

Gülen, who is known for inspiring the grassroots Gülen movement, also known as the Hizmet movement, with his peaceful teachings, reiterated the incompatibility of Islam and violence. “Any form of violence against innocent civilians or persecution of minorities contradicts the principles of the Quran and the tradition of our Prophet (peace be upon him),” his message stated.

The Gülen movement refers to a cluster of religious, educational and social organizations founded and inspired by Fethullah Gülen, a Turkish Islamic scholar, author and speaker now in his late 60s. The movement strives to give faithful Muslims the secular education they need to thrive in the modern world. At the same time, it also […]