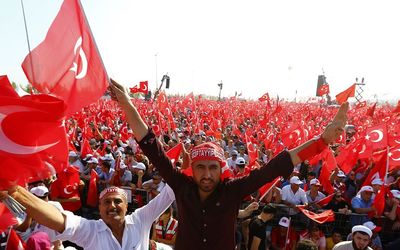 IN THE late evening of Friday, July 15, word spread across the world that a coup was under way in Turkey. The president was missing, the military announced it had taken control of the country, and a few hours later, in the early hours Saturday morning, the coup was over.

In the days after the coup, one man’s name was being furiously googled: Fethullah Gulen, an Islamic preacher, and the followers of his Hizmet (meaning “service” in Turkish) movement were accused of orchestrating the failed attempt to seize control of the country that left 232 people dead and 1,541 wounded.

Gulen denied involvement in the coup and condemned “in the strongest terms” the attempt to topple the government.

But Turkish President Recep Tayyip Erdogan reacted to the attempted coup not only by purging the Muslim cleric’s alleged supporters at home in Turkey — but also by pressing countries around the world to crack down on Gulenist organisations.

The Hizmet movement reaches across the world, in a network of schools, mosques and other institutions that follow its teachings and are affiliated to it in varying degrees.

The Financial Times reported that a hospital in the Somali capital of Mogadishu, built and run by a charity linked to Gulen, was shut down after the coup by the order of the Somali government, a beneficiary of Turkish aid.

In SA, at the beautiful Turkish Nizamiye mosque in Midrand, Ayhan Çetin, executive director of the Turquoise Harmony Institute, jokes that he and the mosque’s imam, Ibrahim Atasoy, are terrorists now. Both the mosque and the institute are inspired by Gulen’s teachings.

There are also seven schools in Cape Town, Pretoria, Johannesburg and Durban that follow his teachings.

The mosque, opened in October 2012 by President Jacob Zuma, is the biggest in the southern hemisphere. It was built by Turkish businessman Ali Katircioglu, a follower of Gulen.

In Atasoy’s office in the mosque complex, Çetin says Hizmet is less of a centralised system and more of a philosophy, based on the ideas shared by Gulen.

Hizmet began as a movement for equal education. In the late 1960s Gulen, practising as an imam in Izmir in Turkey, emphasised the need for quality education for all children, irrespective of their backgrounds, and with the help of a few businessmen in the community, schools were established to realise that goal.

“This is how everything started — with a couple of students and a couple of businesspeople. The main purpose was to help poor kids to get a quality education,” Çetin says.

The graduates of those schools slowly became part of the Turkish system, as teachers, doctors, prosecutors and civil society activists.

Over the years more schools opened up across Turkey and in the early 1990s, the movement began expanding beyond Turkey, into the Balkans and central Asia, and then into south Asia, Latin America and Africa. At its peak, it was present in 160 countries.

In SA, the Horizon Educational Trust has opened schools in the country that subscribe to the teachings of Gulen.

Çetin says the schools are registered in SA and have nothing to do with Turkey other than using Gulen’s teachings. He says the schools perform well in maths and science, and achieve 100% matric pass rates.

“These are people inspired by Fethullah Gulen’s teachings, so they come together and open these types of institutions that promote peace, love, tolerance and understanding. Because this is what we need as humanity in the world at the moment,” Çetin says.

When Erdogan’s Justice and Development Party (AKP) came to power in 2002 on an Islamist platform, it was closely associated with Gulen’s movement, using its widespread network, particularly in countries where Turkey did not have embassies.

But the relationship has grown increasingly acrimonious and in 2013 Gulen was accused of masterminding corruption allegations against Erdogan’s government. Erdogan accused Gulen of mobilising Hizmet sympathisers against the government.

Çetin says that since then individuals belonging to the Hizmet movement have been targeted, and affiliated institutions have been seized and closed.

Both Atasoy and Çetin point to the oddness of last month’s coup attempt — how quickly it was it ended and how swiftly Gulen was accused of masterminding it. Both men say that they don’t know who organised the coup but one thing was for certain Erdogan was the one who benefited the most.

Atasoy says the priority of Gulen’s philosophy is the sanctity of all life, and he does not even let his friends use pesticides. “You are accusing someone who is very sensitive to God’s creations of being the mastermind behind all these terrorist activities,” he says.

Çetin says the Turkish government has tried to retaliate against them in SA but they operate transparent, registered organisations.

Atasoy says poorer courtiers that rely more on Turkey will be more affected.

One such country to feel pressure from Turkey since the coup attempt is Kyrgyzstan. Turkish Foreign Minister Mevlut Cavusoglu has called Kyrgyzstan the “base” for Gulenists in the region, who he says have “infiltrated” the country’s institutions.

The country has 30 Gulen-linked schools and a university.

Turkish ambassador to SA Kaan Esener says the latest coup attempt was very different from those that have occurred in Turkey in the past. This time, the government was confronted by a terrorist group that was trying to capture the state, he says.

Previous coups and attempted coups in the country have been conducted by military leaders.

Turkey’s military is considered to be a defender of the secular values underpinning the country’s birth.

In this instance, though, the accusation from the government is that state institutions have been infiltrated by Gulenists.

Esener says Turkish authorities knew this group had been trying to infiltrate state institutions for about 40 years, but did not realise the extent to which the group had succeeded.

He says Gulen operated a secretive transnational network that aimed to take over the Turkish state and impose its own regime.

Turkish prosecutors have been preparing case files to expose these people and remove them from the institutions, he says.

Tens of thousands of people were detained in Turkey after the coup attempt, many of them police, judges, public servants and teachers.

Esener says the foiling of the attempted coup “exposed who was part of the group and who had become a disciple of this cleric. Now what we are seeing in Turkey … is the nation as a whole has become unified.”

The government is now purging state institutions of Gulen’s followers but it is up to the judiciary to do what is necessary to apply the role of law, he says.

“I think all these people who are part of this Gulen movement have to sit down with the coup head and decide where they want to be, because here is a criminal syndicate that did not flinch from using lethal force against the public in Turkey,” Esener says.

Declining to comment on the Gulen movement’s schools in SA, Esener says state institutions in SA have been infiltrated by former students of Gulen-linked schools.

Esener says the embassy is speaking to SA’s Department of International Relations and Co-operation regarding the organisation. “SA has to decide for itself how it wants to take action. They are being informed on what is happening in Turkey and what is happening in SA as well.”