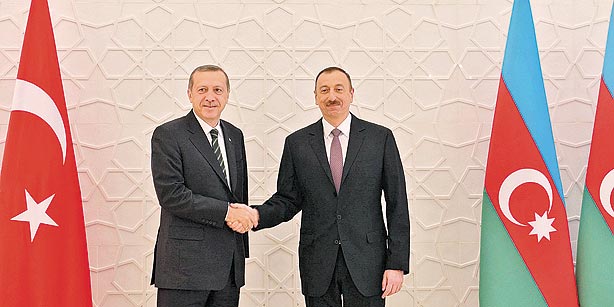 After the ruling Justice and Development Party (AK Party) won a decisive victory in the highly contested municipal elections held on March 30, considered by many to be a referendum on whether the AK Party had its lost the public’s support, Prime Minister Recep Tayyip Erdoğan paid his first international visit to Azerbaijan in a bid to consolidate his victory.

Although it is an established tradition for the leaders of both Azerbaijan and Turkey to pay their first overseas visit to each other after an election victory to show the special relationship between the two countries, this time Erdoğan’s visit was a surprise. The election concerned only local and municipal candidates, and did not officially involve Erdoğan, despite the extent of his campaigning for his chosen candidates and the heavy shadow his rule cast over the elections.

However, it would be incorrect to claim that that Erdoğan’s Baku visit was not anticipated, given that the Hizmet movement — with which Erdoğan is locked in a struggle — has a strong and widespread network in Azerbaijan.

Since Dec. 17, 2013, Erdoğan has been battling with a corruption scandal which has dominated Turkish public discourse and has implicated three former ministers’ sons, businessmen close to the government and several high ranking officials and has affected Azerbaijan, Turkey’s main ally in the region. The domestic turmoil in Turkey spilled over into Azerbaijan when nearly all online and opposition media published news stories alleging a “parallel structure” inside the Azerbaijani government. “Parallel structure” is a veiled reference to the Hizmet movement, inspired by US-based Turkish cleric Fethullah Gülen, who the Turkish government claims to be the main force trying to topple the ruling Islamist-rooted AK Party.

However, Gülen has dismissed the allegations in interviews with the Wall Street Journal, the BBC and Today’s Zaman as well as in an article he wrote for the Financial Times two months ago. He told Today’s Zaman that the Hizmet movement is faced with heavy pressure and oppression and that the slander and smear campaign run against him and the movement are “10 times worse than what [Turkish people] saw during the military coups.”

While the Turkish government was conducting large-scale profiling activities towards suspected followers of Hizmet and wiretapped telephone calls were being leaked, revealing alleged corruption involving the Turkish government, the opposite was taking place in Azerbaijan. Several emails allegedly revealed close links between Gülen and members of the Azerbaijani government.

This development came after Erdoğan ordered Turkish diplomats serving abroad to “tell the truth” to their host countries about the Hizmet movement. During an annual gathering of ambassadors in Ankara on Jan. 15, without openly naming it, Erdoğan accused the Hizmet movement of attempting to overthrow his government through a “judicial coup.”

The real reason why Erdoğan paid his first international visit to Azerbaijan during such a sensitive time for his government is that Azerbaijan is the first country where the Hizmet movement set up schools — in the early 1990s, following the collapse of the Soviet Union. Azerbaijan is therefore very important as is it the cradle of the Hizmet-affiliated schools which can be found in 160 countries around the world.

The aim of Erdoğan’s visit to Azerbaijan was revealed during a press conference held with Azerbaijani President Ilham Aliyev in the Azerbaijani capital Baku on Friday. When asked if the leaders had discussed the Hizmet movement, Erdoğan implied that they had mentioned it as part of the bilateral talks, while Aliyev said that they “won’t allow anything to damage the [allies’] relationship.”

In Turkey, Aliyev’s statement was taken to mean that Turkish schools might be shut down by the Azerbaijani government, and that this was the main purpose of Erdoğan’s visit.

For those who have not followed the story of the Hizmet-affiliated schools in Azerbaijan, it bears repeating that Azerbaijan was the first country to host the Hizmet schools, which aim to provide local families with alternative education choices. The collapse of the Soviet Union, the geographic proximity and the two countries’ unofficial motto of “one nation, two states” made Azerbaijan the ideal first venue for the schools, Harun Tokak, former president of the Journalists and Writers Foundation (GYV) — whose honorary chairman is Gülen — said in an interview with fgulen.com in 2005.

The first Hizmet school was opened in the Azerbaijani exclave Nakhichevan, with the blessing of ex-President Heydar Aliyev, Azerbaijan’s third president who governed for two consecutive terms between 1993-2003 and was later succeeded by his son Ilham Aliyev. Heydar Aliyev sympathized with the aim of the Turkish schools, which was to provide a modern education in the post-Soviet nation which emphasizes its shared cultural traits and historical background with Turks in Anatolia.