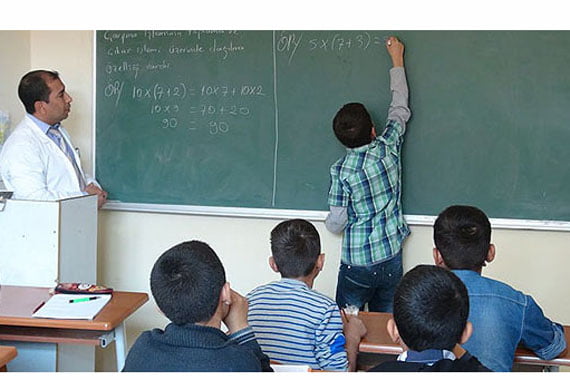 A classroom in a prep school in southeastern Turkish province of Şırnak. (Photo: Cihan, Ali Güven)

Today’s Zaman’s headlines over the last couple of days on the government’s plan to shut down the prep schools — institutes called dershanes that help students prepare for Turkey’s standardized high school and college entrance exams — might seem insignificant and even irrelevant to a foreign observer. After all, why have a nationwide debate on something that doesn’t seem to be a pressing issue for the country or the region?

However, it’s not as simple as it looks, just as the Gezi protests went well beyond a discussion over some trees or a park. The government’s, or to put it more accurately Prime Minister Recep Tayyip Erdoğan’s, desire to have control over the prep schools, which have been operating in Turkey for decades to compensate for the insufficiencies of the state schools in preparing their students for competitive standardized university entrance exams, surfaced earlier this year. In an effort to prepare society for the idea, the government has been running a public relations campaign, arguing that the prep schools are a financial burden on low-income families and a cause of inequality in the country. Such an argument is only a façade. The prep schools are the only way students at overcrowded and insufficient state schools can level the playing field with students at more successful schools to ready themselves for the exam they all have to take to get into college.

Nobody wants the prep schools to be necessary. They are the product of a dysfunctional national education system that is unable to provide the same level of education to kids in the West and the East of the country. Thanks to the prep schools, many students from Anatolia and rural areas have been able to get into the best universities in Turkey, something they couldn’t have dreamed of otherwise.

On Thursday, Zaman unveiled a draft law by the Ministry of Education aiming to close not only the prep schools, but also the reading halls that are free of charge, especially in southeastern Turkey. Why shut down free education services if the concern the law is addressing is the financial burden on families? In the absence of educational opportunities in a terror zone, the Kurdistan Workers’ Party (PKK) could easily recruit young people.

Indeed, everyone knows the answer. It is an open secret that Erdoğan is not targeting the prep schools, but the Hizmet movement that is inspired by the Islamic scholar Fethullah Gülen.

Why? People and companies that are sympathetic to the movement operate the majority of Turkey’s prep schools. Like the rest of the educational institutions affiliated with the movement, they are the most academically successful, sending students with outstanding scores to the best schools each year. College education in Turkey is the only path to social mobility for poor and rural children.

How then could Erdoğan be uncomfortable with the success of these children, who share his sociological and cultural background?

Mainly because the prep schools are the first place that the youngsters get acquainted with Hizmet movement supporters. There is no religious curriculum in any of these prep schools — or in any of the movement’s schools around the world — but students get to know the teachings of Gülen simply by observing the behavior of the teachers and people they interact with. If they are interested, they can read the work of Gülen and become involved in the movement completely of their own free will.

Thanks to an unproven assumption that has already turned into an urban legend — that sympathizers of the Hizmet movement have infiltrated the state — Erdoğan now perceives the movement as a rival to his absolute rule. He’s very jealous of his political power, and the idea of sharing it with anyone else frightens him. He sees the prep schools as the root of the problem, and rather than trimming the branches of the tree, he aims to uproot it.

Whether or not the Hizmet movement is “infiltrating” the state could be the subject of another piece. Considering its global efforts, seeing this humanitarian social movement only in terms of narrow political calculations shows a lack of vision. Also, who infiltrates whose state? Does the state belong to a certain group? Are sympathizers of a religious scholar not allowed to become civil servants if they are qualified and perform their duties in accordance with the law and their own work ethic? As an American sociologist I recently talked to said, such an argument reveals the belief that the state is something separate from society and belongs to a certain group.

With his open war on the Hizmet movement, Erdoğan is shooting himself in the leg. He is undermining a part of his own political base, because Justice and Development Party (AK Party) voters and supporters of the Hizmet movement overlap. And it is not possible to explain the attempt to shut down the prep schools, from which many families benefit, with rational arguments. You simply cannot sell this idea on the argument that your goal is to eliminate inequality. If nothing else, it is an open violation of the right to free enterprise, which is protected by the Constitution.

The ironic thing is that the Hizmet movement invested much effort to support the referendum in 2010 that envisioned a new constitution (but failed to make it a reality), not for the sake of the AK Party, but for the further democratization of Turkey. It seems that Erdoğan dismissed the contribution of the grassroots Hizmet groups during this process as well as during all the critical moments of his government, such as the legal attempt to close the AK Party.

Erdoğan’s attitude more and more reminds of the French monarch Louis XIV, who bequeathed a now-infamous expression to the jargon of political science: “I am the state!”

It is sad to see what greed turns a politician into in the absence of wise advisers and consultative decision making.