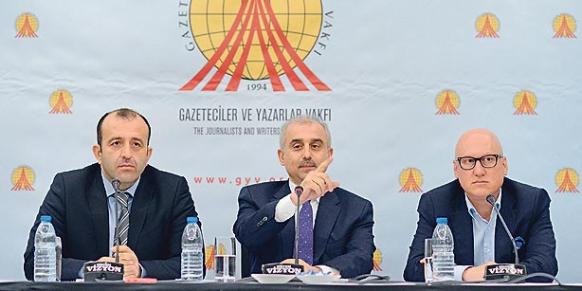 The Journalists and Writers Foundation (GYV) — whose honorary chairman is Turkish Islamic scholar Fethullah Gülen — has stated that Prime Minister Recep Tayyip Erdoğan has been trying to create the perception that the Hizmet movement is being backed by the US with his recent request for Gülen’s extradition though there is no legal basis for one.Holding a press conference in İstanbul on Wednesday, the GYV responded to allegations that have been directed at the faith-based Hizmet movement, inspired by the teachings of Gülen, as part of a defamation campaign being conducted by circles close to the Justice and Development Party (AK Party) in the last five months.The GYV released a statement at the beginning of the press conference in which it pointed to Erdoğan’s recent call for Gülen’s extradition from the US. Reiterating Erdoğan’s interview with an American TV network in which the prime minister said: “I hope the US, as our strategic partner, will extradite Fethullah Gülen. It should at least deport him,” the GYV stated: “It is scandalous for Erdoğan to ask the US to extradite Mr. Gülen despite the fact that there isn’t any single ongoing judicial investigation about him. This also signifies that any future investigation that might be launched against Mr. Gülen will be completely politically motivated. Moreover, Mr. Gülen was tried and acquitted in connection with various claims and slanders of a similar nature in the past. There is no evidence acceptable in terms of legal principles and norms and international practices that can justify Mr. Gülen’s extradition,” adding that with this move mediated via the media, Erdoğan is clearly seeking to create the perception that the Hizmet movement is under the control and guidance of the US.

“However, the Hizmet movement attaches great importance to universal human rights, the rule of law and peaceful coexistence and has been conducting its education-centric activities in over 160 countries, including the US. The efforts to portray these activities as being controlled and guided by a foreign state, culture or secret service constitute a grave slanderous insult against the supporters of the Hizmet movement who come from diverse religions, languages, ethnicities and cultures around the world, particularly including the altruistic people of Turkey,” the GYV added.

When asked to provide more details about Gülen’s extradition, GYV Chairman Mustafa Yeşil said Erdoğan’s request was an attempt to manipulate public perception and the image of Gülen and the Hizmet movement, adding that Erdoğan and his government want to create the perception that “we requested that they extradite Gülen but they didn’t do so; those people [Hizmet followers] are thus being backed by America.”

Yeşil said Gülen’s extradition is not only an internal legal issue for Turkey but the US as well, stating: “The allegations against Gülen should be confirmed by the Turkish judiciary and subsequently confirmed as crimes by the American judiciary. This is also not enough for an extradition. The US Foreign Ministry must give permission for a possible extradition. As we know, there has not been any diplomatic process launched between the two countries for the possible extradition of Gülen. However, we all know the US is never a party to unlawful practices.” Yeşil also underlined that an extradition of Gülen doesn’t seem likely under the current circumstances.

In response to a question on whether or not they expect a large-scale operation to be launched against pro-Hizmet institutions or individuals who are stigmatized by the government as being a part of a so-called parallel structure, Yeşil said there really were a “parallel structure” engaged in illegal activities, this structure would have been revealed and punished through legal processes. He added that the government has been claiming this parallel structure is the Hizmet movement, although there is no evidence to back up his allegations. Yeşil said they are not fearful of any operation or legal process on this issue because the Hizmet movement has never engaged in any illegal activity.

Commenting on sweeping purges taking place at various public institutions, the judiciary and through the police force since a recent corruption scandal implicating four former ministers and some other state bureaucrats went public, Yeşil said that there have been many reassignments and dismissals that have taken place under the pretext of fighting “reactionism” during previous periods. He added that in the current period, the term “reactionism” has been replaced by the “parallel state.” He is referring to the reassignment of many state officials for allegedly engaging in reactionary activities during the Feb. 28 coup era. Pointing out that thousands of police officers and dozens of prosecutors have been reassigned since Dec. 17 of last year, when the corruption scandal went public, Yeşil said that those reassignments took place without any evidence or legal process, adding that the reassignments don’t have any legal basis.

Since the graft probe, thousands of police officers have been reassigned or removed from their posts because of alleged links to the Hizmet movement. The government and circles close to it have accused the movement of being behind of the corruption probe.

A reporter asked Yeşil about the accuracy of reports indicating that a group of representatives from religious and social communities in Turkey visited Gülen in Pennsylvania and asked that a reconciliation process be started between the Hizmet and the government. They reportedly expressed concerns that the ongoing tension between the two might negatively affect other communities in Turkey. In response to this question, Yeşil said that no such delegation visited Gülen. Some media outlets quoted Gülen as saying, “The surgery has already started [and therefore] this can no longer be treated with medicine,” in reference to making a possible reconciliation between the Hizmet and the government. Yeşil said that Gülen never said such a thing and that it was in fact Erdoğan who said this during a meeting with members of the press.

A large-scale propaganda war is being conducted by some circles close to the Justice and Development Party (AK Party) government against the Hizmet movement and Gülen, particularly since the corruption scandal erupted.
Indicating that the businessmen close to the Hizmet movement are subject to pressures from circles close to the government, Yeşil said: “I regret to say that some businessmen have some deep concerns. Those who are close to the movement in particular are being subjected to some difficulties while doing business. I will not give names, but we had made some reservations and [organized] various programs at certain hotels Those hotels called us and expressed their concerns to us, saying that they were called and told, ‘We don’t find you hosting those people [Hizmet followers] appropriate. We see you are still supporting those people.’ Such things are neither nice nor right.”

Yeşil also said that the Education Ministry has been frequently sending educational inspectors to schools or private exam preparation courses close to the Hizmet movement to put pressure on those institutions. He underlined that those institutions are totally legal and provide high-quality education; he said they would not be concerned about the frequent inspections if they are carried out within the framework of the law.