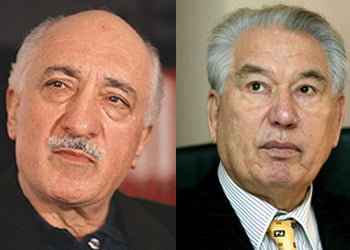 “The Architects of Peace and Dialogue Conference” took place in the city of Talas, Kyrgyzstan. The theme of the conference was the life of Fethullah Gülen, Kyrgyz intellectual Torokul Aytmatov and the famous writer Genghis Aytmatov, and the call for peace and dialogue that these three authors promote in their books.

The conference, which attracted a large number of academics, was organized by Dialogue Eurasia Platform (DAP), Kyrgyzstan Culture and Information Ministry, Talas Region Governor’s office and Talas State University and held in Atay Ogombayev hall in the city of Talas.

In his opening speech Sherniyaz, the Minister of Culture and Information, underlined the importance of holding the conference in the city of Talas. Sherniyaz said that Talas is the hometown of Genghis Aytmatov, the founding member and current chairman of DAP, and reminded that during the globalization of the world, DAP spent a lot of effort to reinforce the dialogue between people, and to improve the relations between nations. After pointing out that conferences on peace and dialogue are important events of this age, Sherniyaz said that nations will reach their peaks only through leaders like Genghis Aytmatov and Fethullah Gulen.

Koysun Kurmanaliyeva, the Governor of Talas said making a call to dialogue and peace was the mission of the whole mankind. Reminding that the uprising against the ruling regime of Kyrgyzstan had started in Talas, Kurmanaliyeva stated that having the call for peace and dialogue being made in this city also has a great meaning. Kurmanaliyeva highlighted the fact that people’s qualifications like patience and understanding were as equally important as being open to dialogue.

Harun Tokak reminded the fact that the Turkish world met the light of Islam during the battle of Talas in 751, thus emphasizing the historical importance of Talas, Tokak also emphasized that both the world-famous protagonist Manas in Kyrgyz epic and the famous writer Genghis Aytmatov settled down in these lands. Tokak pointed out that Aytmatov revived the forgotten Kyrgyz culture and introduced Kyrgyzstan, a small country with a population of 5 million, to the whole world. Tokak said, ‘We learned about Kyrgyzstan and this geography from Aytmatov’s novels and works.’ Tokak praised Genghis Aytmatov’s practice of putting national motifs in the forefront in his writings. ‘With national motifs, Aytmatov created a universal joy and imposed this views to the whole world’, he said. Giving examples from Aytmatov’s novels Tokak commented that Aytmatov attached importance to the young generation, its culture and values. Tokak said they, as DAP organized conferences called, are ‘Peace and Dialogue Architects’ in many countries and all leading, intellectuals and thinkers of those countries call for peace and dialogue.

Prof. Dr. Mahmoud Kashkari Barskani, chair of the conference, and Asan Ormuşev, president of the Eastern University informed guests about DAP’s activities. Aytmatov’s sister Roza Aytmatova who participated in the program shared memories about her brother.

Gulen is the symbol of peace and dialogue

Prof. Dr. Askar Bedelbayev, president of social studies in Kyrgyzstan Science Academy, made a presentation on “Tolerance in Fethullah Gulen’s Life and His Works”. Bedelbayev emphasized the world-wide educational activities of Gulen followers. He referred to Gulen, who inspired establishment of hundreds of schools in different countries, as the symbol of peace and tolerance.

Temirbek Toktogaziyev, director of Manas Yankisi TV, emphasized that Fethullah Gulen is an excellent role-model. Toktogaziyev said that that Gulen dedicated his life to humanity. He underlined that schools that were inspired by Gulen’s ideas carry great responsibilities. He said that both Gulen and Cengiz Aytmatov invite people to live humanely.

Minister Sherniyaz presented awards to Harun Tokak and his assistant Mustafa Baskurt because of their contributions to cultural cooperation between Kyrgyzstan and Turkey.

The conference, which hosted a large number of academics and journalists, adjourned with the distribution of brochures and magazines about DAP.

Source: The original news was published on Oct. 28, 2010 at Zaman Newspaper in Turkish and was translated into English by IDC members: http://www.zaman.com.tr/haber.do?haberno=1046159&title=kirgizistanda-baris-ve-diyalog-masaya-yatirildi

An analyst Dosmir Uzbekov believes that the closure of a wide network of schools and high schools “Sebat” will cause outrage among the population. “My son has graduated from Turkish lyceum, and I am very pleased with the education he received there. “Sebat” has become an inherent part of the education system of Kyrgyzstan.