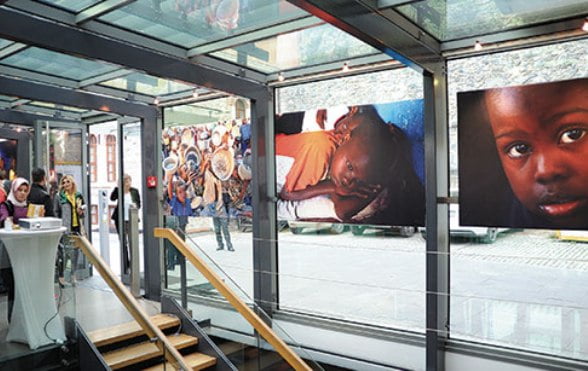 Savaş Metin, secretary-general of Kimse Yok Mu, spoke to the press about the exhibition, saying: “Modern people say they have a number of things missing — a bigger house, a more luxurious car, more clothes. But for millions of people, the biggest deficiency is drinking water, a school and a hospital. This exhibition was opened in order to bring attention to such deficiencies and try and fill the missing gap together.”

Kimse Yok Mu has built 750 water wells in 15 countries since 2011, providing over 1.5 million people with access to water. It has also established four fully equipped hospitals and schools around the world that total 75,000 square meters. Its mission is to spread kindness by helping people from all races, ages, religions and social classes, and it strives to create social support models while combating inequalities due to illness, unemployment and psychological and physical disadvantages. The charity also focuses on using effective methods to raise awareness, such as campaigning for places afflicted by earthquakes, fires, floods, hurricanes and other natural disasters.

Ülkü Fırat Atlamaz, brand manager at Kimse Yok Mu, told Today’s Zaman that the charity’s exhibition might become a traveling show. The organization has an archive of photos taken by volunteers who participated in Kimse Yok Mu projects. When asked how it selected photos for the exhibition, she explained: “Our volunteers have been taking pictures for the last 12 years. Some of the pictures in the show were taken by photojournalists at the Zaman daily. A team from APCO Worldwide and Kimse Yok Mu united to designate a theme for our exhibition and chose pictures from the archive accordingly.” Atlamaz also added that objects from places where Kimse Yok Mu does its work are on display in addition to the pictures. Pointing to a piece of wooden board, she explained that it is one of the “notebooks” children from a country in Africa would use to take notes on at school.

“Our job is to bridge the gap between those who can help and those who are in need. Artistic activities like this exhibition go a long way toward this goal and help us gain attention for our activities,” Atlamaz said.

Kimse Yok Mu has been active in the arts scene both in Turkey and abroad. Mustafa İlhan, media and advertisement director for the charity, told Today’s Zaman that the NGO recently organized workshops for women in Albania to train them in graphic arts. “Through these means, we [are able to] reach different segments of societies,” İlhan said.