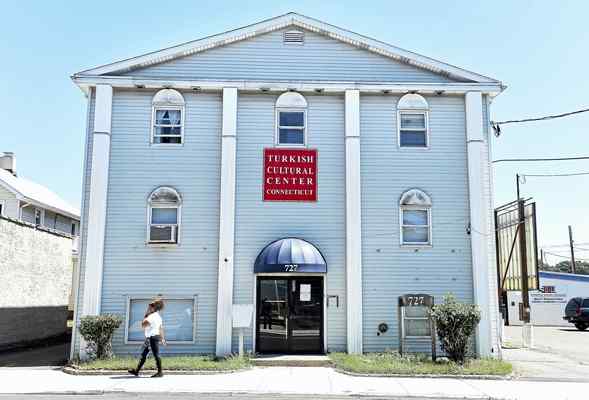 Usually, if you hear about a particular ethnic group that’s a victim of graffiti, it’s from some other ethnic group or someone who doesn’t understand their culture.

But a building facing the Turkish Cultural Center Connecticut recently was tagged — for the second time in three years — with graffiti that appears to be an extension of a political battle raging within Turkey itself.

The graffiti, discovered July 17, reflected the viewpoint of the government of Turkish President Recep Tayyip Erdogan, who has blamed followers of a cleric who now lives in Pennsylvania’s Poconos for many of Turkey’s recent troubles.

When it was discovered the morning after an attempted military coup in Turkey, it sent a chill through the bones of cultural center members, who worry about what might come next.

Spray-painted on the exterior wall of an apartment building directly across Campbell Avenue from the center, the graffiti read, “MURDER FETO, KILER (sic) FETO, KATIL FETO.” 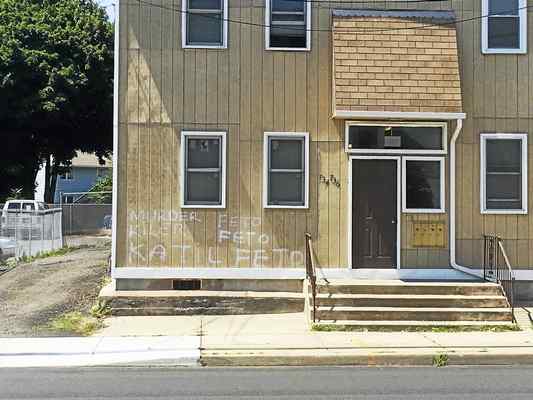 “FETO” is the Turkish government acronym for a movement inspired by moderate Turkish Islamic theologian and preacher Fethullah Gülen, who has lived in the United States since 1999.

Gülen, who lives in Saylorsburg, Penn., and his followers have been blamed for the coup, as well as for two corruption investigations that preceded it. On Thursday, a court in Istanbul issued a warrant for Gülen’s arrest, according to the BBC.

Gülen has denied any involvement in the attempted coup, telling the Associated Press, “In brief, I don’t even know who my followers are. You can think about many motivations of people who staged this coup.”

Many Turks also blame the United States for the attempted coup.

Gülen’s followers run a loosely-affiliated global network of charitable foundations, professional associations, businesses and other projects, according to the AP. That includes about 150 taxpayer-funded charter schools in the United States.

As it turns out, Gülen, 75, also inspired the people who founded the cultural center in West Haven, although several said they have no formal affiliation with him.

FETO stands for “Gülenist Terror Organization,” as the Erdogan government refers to the Gülen movement.

“Katil” is the Turkish word for killer, or assassin.

Erdogan, who has taken steps toward both a more authoritarian regime and a more hardline Islamist view since the attempted coup, has publicly blamed Gülen and his supporters for the coup and other problems in Turkey.

In the aftermath of the failed coup, the Turkish government has conducted a purge that has removed an estimated 72,000 people from positions as police and public servants.

The government also has detained 18,510 people, arrested 9,949, shut down 1,058 schools and dormitories and 1,229 associations and foundations, as well as 35 hospitals and 150 news outlets, and has detained 59 journalists, according to Turkeypurge.com, a website that monitors human rights abuses in the post-coup purge in Turkey.

The news outlets seized or shut down included Zaman, which was Turkey’s largest circulation newspaper before it was shuttered.

The rumblings in Turkey — a largely secular NATO member that long has been one of the most stable countries in the Islamic world — have come as a surprise to many people, although it is less surprising, perhaps, when viewed through the prism of Turkey as a country that rose up out of the ashes of the oldOttoman Empire.

Members of the Turkish Cultural Center said that while they may be inspired by Gülen, they are not part of any organization linked to him.

“We’re not political, but we’re affiliated with a social movement, called Gülen movement,” said a member of the cultural center who asked that his real name not be used out of fear that family either here or in Turkey might be harmed.

The movement “is focused on education” with schools in more than 160 countries — and a total of 3,000 institutions, including schools, universities, hospitals, relief institutions and dialogue and cultural centers, said the member, who we will call Yusuf.

“We don’t have a formal affiliation but the founders of the Turkish Cultural Center were inspired by Mr. Gülen’s teachings,” Yusuf said.

Another cultural center member, who we will call Burak, said the recent graffiti followed a similar incident in March 2014 in which someone spray-painted, “NO MORE FETO. – FOREVER R.T.E.” on “exactly the same spot” of the same building across the street.

R.T.E. are the initials of the president.

“They think the government of Turkey is behind them,” Burak said of whoever did the graffiti.

But while at this point it’s just graffiti, “In Turkey, families are separated because of this,” he said.

Turkey’s government has “been causing people of Turkey to divide and develop strong hatred towards Gülen Movement, its supporters and followers,” Burak said. “We are very disturbed and afraid that this hatred may cause some people to react and our centers in West Haven and Hartford may become targets of strong supporters of government party here in Connecticut.”

As the situation in Turkey “is becoming more chaotic day by day, we have high concerns that … our centers may be targeted by some other hateful acts.”

Yusuf and Burak said the cultural center has reported the graffiti to both the FBI and the West Haven Police Department. An FBI spokesman said Friday that the police department is investigating it.

Yusuf said he is concerned about what might happen next because in Turkey, “Basically, they silenced most of the opposition media.”

Matthew J. Schmidt, an assistant professor of national security and political science at University of New Haven, pointed out that modern day Turkey was drawn up on maps just as were Syria and Iraq, which also were parts of the Ottoman Empire.

Turkey’s secular qualities resulted from the work of its first president, Mustafa Kemal Atatürk — considered the founder and father of modern Turkey — who Schmidt said secularized the country, pushed it toward modern dress and wrote a constitution “that says you have to allow other religions.”

He also separates the Army from the rest of the country, which is why over the course of modern Turkey’s existence, “you’ve had a series of crews, when the Army thought the government was in danger of threatening the constitution.”

“He grew up in the generation immediately following the Ataturk generation. He adopts Ataturkism” and says, “I’m going to finish the project.”

As far as the attempted coup goes, “The coup, to me, there’s just so much we don’t know yet,” he said.

Schmidt said there are reasons to be concerned, including because “the guys (Erdogan) has taken out of the military are the guys who set up all the agreements with the U.S.” with regard to military cooperation.

Now there are all new people in charge, he said.

Schmidt said he didn’t know anything specific about the graffiti in West Haven, but said, “It’s very odd to me that you would have in the United States pro-government Turks bothering to go to do this. It just seems very calculated.”

Asked to describe why Gülen might be threatening to the Erdogan government, Yusuf said that “Gülen is a Muslim scholar, but he is more of a moderate and is close to the Sufi tradition.”

Gülen’s followers also tend to be “very successful, lots of educated people” and followers operate some of “the best schools in Turkey,” he said. “There might be an envy against the Gülen movement.”

Yusuf, who still has family in Turkey, said after the first graffiti incident, “We were really worried about our families. “We just felt afraid, because it’s obviously kind of an intimidating thing against us.”

They reported it to the police.

But “we are more concerned now because Erdogan has tightened his pressure to the movement more than ever. He’s the only strongman in Turkey now. There is a big wrath and hate against us that made us more concerned this time.

In Turkey, “They are hanging Mr. Gülen’s effigies in the streets,” he said. “This is really scary for us.”