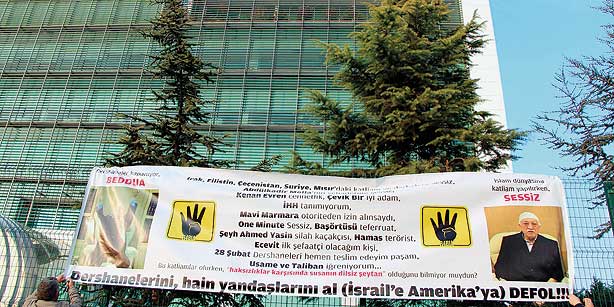 About a dozen people gathered on Sunday in front of Zaman, Turkey’s largest-circulated newspaper, to protest what they claim is critical reporting of the largest corruption scandal in Turkish history, in which senior members of the ruling Justice and Development Party (AK Party) government have been implicated.

The protest followed a series of public remarks over the weekend by Prime Minister Recep Tayyip Erdoğan, who attacked Zaman without mentioning it by name, urging people at rallies not to pay any attention to what was being reported by certain media organizations.

Responding to Erdoğan’s call, protestors, some bearded, showed up at the Zaman building, chanting slogans like, “We are soldiers of Tayyip.” They also brought a money-counting machine, a reference to a police raid that found a similar machine at the home of the son of a government minister along with millions of cash and several safes.

The protestors held up a banner bearing the picture of Islamic Scholar Fethullah Gülen saying that he despises the Taliban and Osama bin Laden. “Pick up your traitorous comrades and your prep schools, and get out of here, go to Israel, the US,” the script at the bottom of the banner said.

Gülen, who has followers in the millions in Turkey and abroad, has been living in self-imposed exile in the US since 1999.

On Dec. 17, İstanbul and Ankara police staged dawn raids and detained over 50 people as part of a major investigation into claims of corruption and bribery. Two sons of Turkish ministers, Halkbank General Director Süleyman Aslan and an Iranian businessman, Reza Zerrab, are among 24 suspects arrested as part of the investigation.