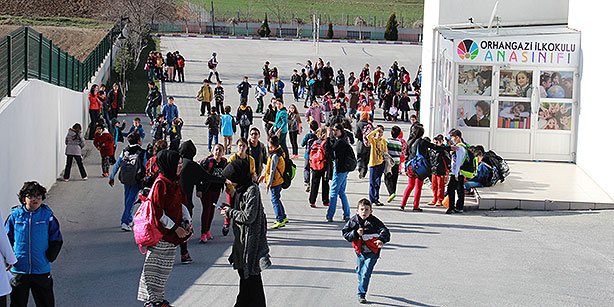 Police officers and inspectors from several government bodies conducted raids on private and prep schools in Bilecik over the weekend as a part of the government-orchestrated operation targeting the faith-based Gülen movement, popularly known as the Hizmet movement. The police and inspectors raided schools in the Bozöyük district of Bilecik on Saturday and raided the private Sevgi Çiçeği Primary School, a Fem prep school and a private dormitory in Bilecik on Sunday. Nearly 20 police officers participated in Sunday’s raids.

Speaking to the Cihan news agency, lawyer Metin Yücel said that the raids were carried out based on allegations of terrorism that the government had put forward against schools affiliated with the Gülen movement, which consists of volunteers inspired by the teachings of Turkish Islamic scholar Fethullah Gülen. “How can a terrorist organization be associated with schools? Have you ever heard about a terrorist group opening a school? How could such a thing even happen?” Yücel asked.

Yücel said the inspectors and the police did not encounter any evidence of criminal activity during their raids on the schools but added that some pro-government media outlets had distorted the raids in their reports. Pro-government media outlets’ reports that police broke down school doors during the raids were completely baseless, Yücel said, further adding that the police did not find any unlawful documents or evidence during the raids.

Yücel also said no detention or arrest warrants were issued as part of the operation.

A number of private and prep schools that are sympathetic to the Gülen movement have been targeted by the Justice and Development Party (AK Party) after a major graft investigation implicating President Recep Tayyip Erdoğan and other top AK Party figures was made public on Dec. 17, 2013. Then-Prime Minister Erdoğan accused the Gülen movement of plotting to overthrow his government.
Erdoğan said he would carry out a “witch hunt” against anyone with links to the movement. He has also ordered officials in AK Party-run municipalities to seize land and buildings belonging to the Gülen movement by any means necessary. In May 2014, Erdoğan publicly advised AK Party supporters not to send their children to schools affiliated with the movement, vowing, “We will not even give water [to the movement’s members].” The movement strongly rejects the allegations and no indictment has been brought against it.