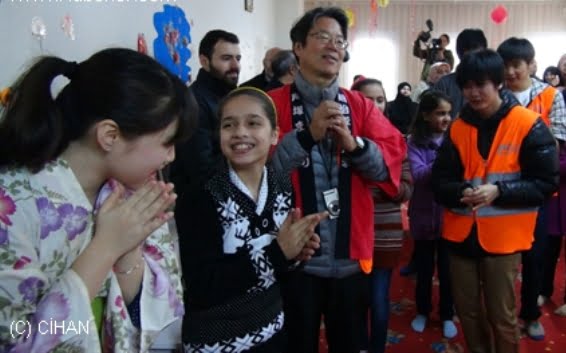 A group of Japanese university students and professors recently came to Turkey to provide educational assistance to Syrian refugees, according to Turkish news sources on Tuesday.

The volunteer group, which came to Turkey through the agency of charity Kimse Yok Mu (Is Anybody There?), consisted of 15 students and professors from Meiji Gakuin University, which has campuses in Tokyo and Yokohama. The group reportedly brought notebooks and stationery for Syrian refugee students living in the İstanbul district of Zeytinburnu.

“This is the first time I’ve been to a country so near to Europe, and I have never met such warm people before in my life,” said one of the Japanese students, Ayano Inoue. “We showed the Syrian students traditional Japanese dances. We had such a nice time with them,” Inoue continued.

Some of the Japanese students mentioned that prior to coming to Turkey, they had assumed that Syrian refugees would be living in very poor conditions. However, following their arrival, they observed that those who had been provided with support by Kimse Yok Mu were living decently.

“Three years ago, following the earthquake in Japan, Kimse Yok Mu arrived on the third day of the disaster. We were very impressed by what they did here. We wanted to return the favor by coming to Turkey and involving ourselves in their services,” said Meiji Gakuin University professor Katsuhiro Harada.