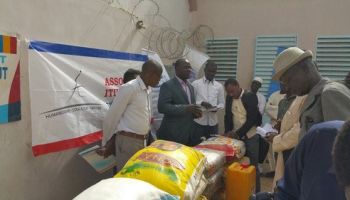 In attendance of the event were Chad Religious Affairs representative Djouma Ousman Sagana, president of Chad Itimad Turkish Foundation Ruhi Ates along with several NGO officials and guests. The orphanage established under the leadership of KYM’s department for children in need of protection, also provides education to the children.

Speaking at the event, Chad Itimad Foundation president Ruhi Ates said, “It is obvious how insufficient the safe shelter facilities are in Africa, having a huge number of vulnerable children and women. A great majority of these children striving to hold onto life need a place for shelter, given that they have been victims of violence, abuse, discrimination and so on. There is no way we could remain indifferent when there are 400 million orphans around the world and many in Africa without a home. We set out this path believing there should be no orphan left in tears. We have reached out to over 60 of them so far. We feel obligated to care for them cause we as human beings cannot and should not let them cry.”

Religious Affairs official Djouma Ousman Sagana expressed his thanks to KYM for providing a shelter to the orphan. “Do you realize what a beautiful work you have done? Only the locals know what these children have been thorough. You have been doing the most admirable work in the world by embracing them. What an honor! On behalf of our state and people, I would like to thank you forever. Especially, to the opinion leader Fethullah Gulen who initiated these efforts. You have never left us alone here. We always had our Turkish brothers by our side whenever we were in need” Sagana said.

According to the UNESCO statistics, there are approximately 150 million homeless children around the world. And it’s a known fact that those without a safe shelter and protection fall victim to violence, abuse and discrimination. Due to financial hardship, a great majority of these children striving to hold onto life still lack a place to call home.