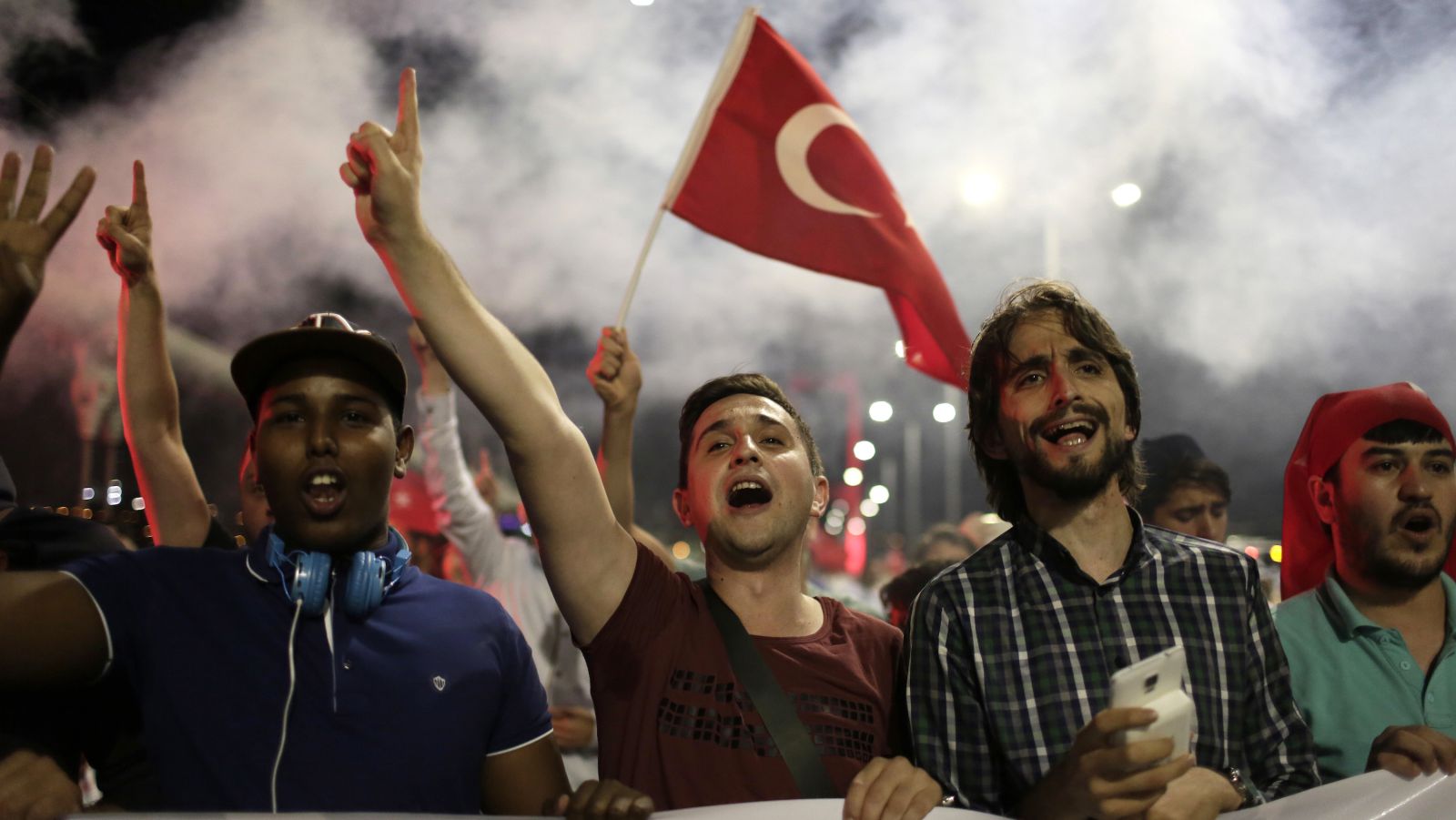 A kind of reverse-coup is underway in Turkey. (AP Photo/Petros Giannakouris)

In the immediate aftermath of the Turkish military’s attempted coup on July 15, the international community responded with relief. While many people within Turkey and outside of it are no fans of president Recep Tayyip Erdogan’s authoritarian regime, the bloodshed and chaos that would have resulted from a government overthrow seemed like the worse of two options.

But a little more than a week after the failed coup, it’s clear that the Turkish president is taking advantage of it in an attempt to gain absolute power in Turkey, enacting draconian measures and targeting any person or institution who might act as a voice of dissent. As Turkey moves toward dictatorial rule, here’s what the international community needs to know.

Turkey has so far used its newly declared state of emergency to force the closure of 2,341 institutions, including universities, charities, hospitals, and labor unions. What does this have to do with the coup attempt?

The government says that it’s targeting institutions believed to support exiled cleric Fethullah Gulen, whom Erdogan has accused of orchestrating the coup. But a look at the list suggests that a great many could have no relationship with the coup attempt, even if they could be linked to the Gulen movement by circumstantial evidence. The list includes the famous Journalists and Writers Foundation; KYM, the largest humanitarian organization in Turkey; and the Turkce-Der, the foundation behind the world renowned International Festival of Language and Culture, which was implicitly endorsed by both President Obama and United Nations general secretary Ban Ki-moon this year. The list also included such unexpected targets as the staunchly secular Association of Judges and Prosecutors (YARSAV), which aims to ensure the independence of Turkey’s judiciary system, and charitable organizations dedicated to such causes as women’s education and blood donation.

The fact that 1,043 private schools; 109 student dormitories; 1,229 foundations and associations; 15 universities; 35 medical institutions; and 19 labor unions have been closed down suggests the Erdogan government is aiming for a complete extermination of Gulen movement, along with any other voices of dissent. Such measures, of course, are grist for the mill for conspiracy theorists, who claim that the attempted coup was orchestrated by Erdogan to annihilate his rivals.

How many people have been arrested or detained so far?

According to the latest update on Saturday evening from president Erdogan, [Turkish], the government detained 13,165 people during the first week after the coup attempt. Out of that number, 8,883 were army personnel; 2,101 were judges and prosecutors; 1,485 were police officers; and the rest were civilians. Among the 13,165 detainees, 5,863 have been placed under arrest, including at least 123 army generals or admirals (some claim the number of generals and admirals under arrestto be as high as 163.)

How is the fallout affecting people who haven’t been detained or arrested?

An estimated 53,000 government workers have been fired or suspended.Even more people are likely to lose their jobs with the closure of thousands of non-government institutions. Already, some 11,000 passports belonging to state officials [Turkish] have been voided. The government has called back some civil servants from leave, and citizens are required to show proof of employment when they try to leave the country. Both of these measures have been enacted under the pretext of preventing Gulen movement supporters escaping prosecutions[Turkish]. All this suggests that the government has an even larger list of people it plans to detain and arrest and is trying to keep them within Turkey.

Has there been any pushback from other Turkish politicians?

Turkish opposition parties were already ineffective even before the coup attempt. The main opposition party, CHP, is trying to mobilize people in order to stand against both the coup and Erdogan’s reverse-coup. But the party’s chances of success are dim.

A few politicians within Erdogan’s own party have expressed concerns about the breadth of powers given to the government under the new state of emergency law. Speaking to CNN Turk Television, deputy prime minister Nurettin Canikli suggested that the powers were “hair raising” and pledged that the government would not put them to use. However, the first statutory decree, which closed down all institutions believed to be linked to the Gulen movement, suggests that Erdogan will not shy away from making use of the new legal framework.

How did Erdogan’s government manage to come up with such a huge list of detainees and establish their potential links to the coup so quickly?

Many people claim that the Turkish government likely had a blacklist prepared before the coup, including Johannes Hahn, the European Union commissioner dealing with Turkey’s membership bid. Hahn’s comments were denounced by Turkey’s foreign minister. But while speaking to Al-Jazeera, Erdogan reportedly said the government “knew who were FETÖ members, laws were preventing us”—apparently suggesting that laws before the state of emergency had prevented his government from going after the alleged members of the Gulen movement, derogatively called Fethullahist Terrorist Organization (FETÖ) among the pro-government circles in Turkey.

Do the lists include only the names of people associated with the Gulen movement?

Unfortunately, no—the lists appear to include anyone the Erdogan government views as a potential threat to its power. The government has already banned all public officials and academics from traveling abroad and taken away the passports of officials who attempted to leave Turkey’s borders. The requested resignation of all deans of all university departments suggests a full-scale cleansing of all voices of dissent.

For the time being, the persecution within the government has been limited to the ministries of justice, defense, home affairs and education. There are 23 more ministries within the government, and it’s likely that workers in those departments will not be spared. Also suffering from the crackdown are the foreign nationals from Britain and other countries working at Turkey’s schools and universities, many of whom have been swept up in the travel ban or lost their jobs as schools closed.

Where are all the detainees being kept? Can the Turkish legal system handle such a huge workload?

The police and legal departments of Ankara and Istanbul, two largest cities of the country, are handling the detainments and arrests. Detainees are being kept in detention rooms and gymnasiums.

Apparently as a part of the overall strategy to destroy the morale of the opposition groups, the police officers are filming how they are keeping the detainees in miserable conditions. Amnesty International has warned that human rights in Turkey in grave danger and that independent monitors must be allowed to access detainees amid allegations of physical and psychological torture. A YouTube video of a police officer rebuking the half-naked soldiers detained after the coup attempt shows the officer telling the soldiers to “go and commit suicide before we hang you!”

It’s unclear which prisons will host the arrestees. Turkish prisons have already become overloaded in the last 10 years. Turkey’s 355 prisons have a capacity of 179,883, yet the country had over 180,000 inmates[Turkish] before the coup.

Is the Turkish judiciary equipped to handle the arrests?

Turkey’s legal system moved at a snail’s pace even before these purges. With 2,745 judges and prosecutors sacked from their positions, the judicial workforce has now been reduced by roughly 20%–which means far more work for far fewer people. It may take years before the detainees receive indictments, let alone trials. Given the seriousness of the accusations, it is expected that detainees will stay in jail until that date.

What will happen when the trials begin?

There is no way that people rightly or wrongly accused of being involved with the coup will see justice within the Turkish judicial system. The whole judicial machinery is highly politicized and will be subject to pressure from the government. The overall confidence of the Turkish people in the country’s judiciary [Turkish] has reportedly fallen in the last five years from 70% to below 30%.

What else might Erdogan do to further crack down on secularism and his political enemies?

Before the coup, there were rumors that Erdogan was getting prepared for an early election that would leave Turkish and Kurdish nationalist parties out of the parliament, giving his AKP party an absolute majority. Now that he has greater public support, he may indeed go for an early election that will remove critical factions from the parliament and from his own party. That would give Erdogan’s party the parliamentary mandate needed to change the constitution and turn the Turkish parliamentary system into an executive presidential system, as Erdogan has been advocating for some time now. Erdogan’s insistence onannihilating the Gulen movement’s grassroots operations all over the world in general, in the Muslim world in particular, also suggests his political goals may go beyond Turkey.

The first decree of Erdogan’s state of emergency declared all the persons and institutions in cohesion with the aims of the Gulen movement to be guilty of the coup attempt. The Turkish legal term used in the decree, iltisaklı, or in cohesion with, was used in charging Can Dündar, the staunchly secular editor in chief of Cumhuriyet Daily, with the crime of plotting a coup together with the Gulen movement. A similar fate awaits all the political and intellectual opponents of Erdogan.

On the night of the coup attempt, all 85,000 Turkish mosques were involved in mobilizing people to take the streets and resist the soldiers. The imams recited the salah, normally recited only for funeral ceremonies, over and over again from all the minarets of the country. Many interpreted this metaphorically, to be a call for the funeral of the Gulen movement. Now it seems that secular Turkish democracy is on its death bed.