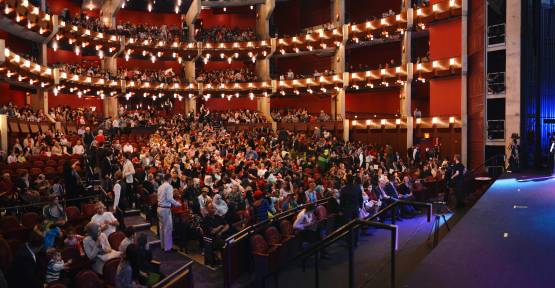 Students hailing from seven states competed in the event, organized jointly by the American Turkish Friendship Association (ATFA) and the Mid-Atlantic Federation of Turkic American Associations (MAFTAA), on Sunday evening at the Hylton Performing Arts Center in Manassas.

The jury had to select the finalists who will compete in the Turkish Olympiads due to be held on May 29-June 15 this year from among 70 contestants who staged a total of 20 performances. The winner in the singing category was Sara Dali, singing the traditional folk song “Yüksek Yüksek Tepelere” (On high hills), and Sumukh Badari in the poetry category with his recitation of “Beni de çağır” (Invite me as well) by Abdürrahim Karakoç. The folk dance group Laurel won the dance category with their performance of the traditional Black Sea dance “kolbastı.”

MAFTAA President Mahmut Yeter said his organization strove to increase awareness of Turkish culture. “We aim to continue these activities that make our nation proud for as long as we can.”

Bob Lazaro, mayor of Purcellville, also delivered a speech at the event, saying he had the opportunity to visit Turkey twice over the past six months. He said he had been greatly impressed by Turkish culture during his visits.

Faruk Taban, president of the Turkic American Alliance (TAA), said more students learning Turkish and getting to know Turkey would contribute to better bilateral relations and thanked the students for their superb performances.

There will be similar festivals in other US cities as well as in Canada over the next few days.

The Turkish Olympiads are an organization of the International Turkish Education Association (TÜRKÇEDER). The qualifying rounds for the Olympiads in Europe this year have been attracting enormous attention from ordinary citizens and politicians in the countries they are organized.

On Sunday, Paris held its own Culture and Language Festival. The event was also recently held in Germany in several towns. Other countries that have so far held the event include Romania, Switzerland, Albania, Kosovo, and Bosnia and Herzegovina.

In Romania, the event was held at Bucharest Sala Palatului, the most prestigious event hall in the city. The event in Munich was held at the Olympiahalle München, a stadium that has the capacity to host 15,000 people.

In a related development, Indonesia held a Language and Culture Festival organized by its Turkish schools for the first time this year.

The Turkish Olympiads have been organized annually since 2003. This year, 150 countries are sending 2,500 students to compete in the event. However, Turkish Prime Minister Recep Tayyip Erdoğan, who accuses the Hizmet movement — which inspires the Turkish Olympiads — of attempting to form a “parallel” structure to seize power, has said he will not let the event take place this year.

The Wisdom School hosted a talk from a member of the House of Lords on Friday 23rd November 2012 to encourage students to engage more with the political and parliamentary process. It was one of over 40 visits to schools that took place around the United Kingdom to mark the final day of Parliament Week, […]