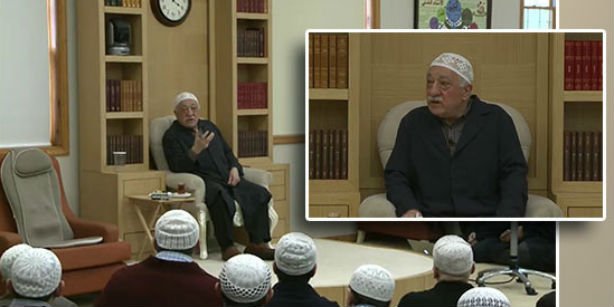 Gülen is seen during his speech aired live on Sunday.

The speech began at around 10:35 a.m. Turkish time and lasted 50 minutes. During the speech Gülen advised Muslims to respond with goodness to evil, even during periods when people are severely oppressed. However, he added, a believer does not apologize to an oppressor.

The live broadcast drew millions of viewers from around the world, with the hashtag #HocaefendiCanlıYayında (Hocaefendi On Air) quickly becoming a trending hashtag on Twitter. Hocaefendi is the title used by Gülen’s followers to refer to him, meaning “venerable teacher.”

The Telecommunications Directorate (TİB) blocked access to herkul.org last week after a decision by the İstanbul 7th Penal Court of Peace. The move came amid increasing pressure on the Hizmet movement, which is inspired by Gülen.

Since Turkey’s largest-ever corruption investigation was made public on Dec. 17, 2013, following police operations on the homes and offices of people from the inner circle of the Justice and Development Party (AK Party), then-prime minister and current President Recep Tayyip Erdoğan and the AK Party leadership have accused sympathizers of the Gülen movement, especially those in the police force and the judiciary, of plotting to overthrow the Turkish government. The movement strongly rejects the allegations brought against it.

Since the scandal, a number of business groups, media outlets, aid organizations, civil society organizations, universities, private schools and prep schools that were established by people sympathetic to the movement have been targeted by government-orchestrated police raids and investigations.

Erdoğan has openly declared on several occasions since December 2013 that he would carry out a “witch hunt” against anyone with links to the movement. He has also ordered officials in AK Party-run municipalities to seize land and buildings belonging to institutions that are linked to the movement by any means necessary.

A coalition of Turkish-American organizations forked over $40,000 yesterday to the Gerritsen Beach library (2808 Gerritsen Avenue) and Gerritsen Beach Elementary School (P.S. 277), institutions that have suffered in the five months since Superstorm Sandy rocked the community. The donation came from Turkish-American groups, non-profits and businesses, spearheaded by Helping Hands Relief Foundation, Kimse Yokmu, […]