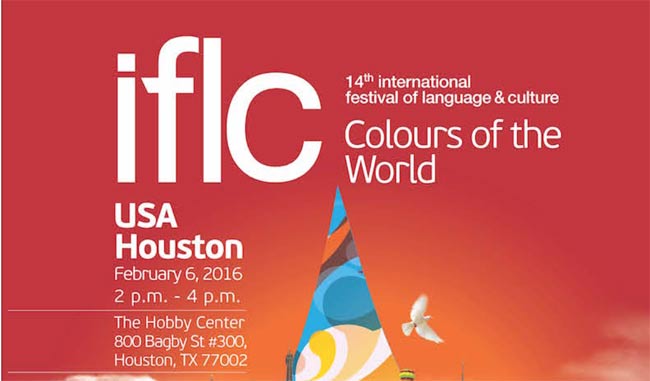 The 14th Annual International Language and Culture Festival, organized by Raindrop Foundation, was held at Hobby Center in Houston on Saturday February 06, 2016. The Raindrop foundation is pleased to entail the tremendous success of the event. With a sold out venue of over 3,000 people combined from all walks of life, everyone enjoyed together this festive atmosphere of live performances in different languages including English, Turkish, Spanish, French, German and many more.

The MC of the program was Rocko Stedy Narvios who also took to the stage with the performers to sing “Language of Love”. Rocko is known to host and perform his inspirational and motivating music all around the country at events as this one and other concerts and festivals being so he made a great fitting for this occasion and did a wonderful job as EmCee . The festival was a group effort and solos of amazing talents organized so wonderfully showcasing the visiting star students from countries like France, Azerbaijan, Kazakhstan, brazil, Georgia, Ukraine, Tunisia, Germany, Senegal, Mexico Pakistan, Indonesia, and also students from visiting southwest states e.g. Arkansas, Oklahoma, New Mexico, Texas. One after another each performance expressed so much passion and love and when the students crossed performed together it was an explosion of delight! They all worked so well together and inspired everyone in the room no doubt to have hope for our future as they each celebrated each other’s difference in culture and language all while knowing we are same.

Even so, having the venue sold out, there were many VIP guests in the audience, who to their surprise, took to the stage as each of them were escorted by a visiting student as part of one big VIP special to sing all together. In honor of such an amazing production and cause for this celebrated event the VIP elected officials presented formal proclamations to the President of Raindrop foundation, Mehmet Okumus, and the President of the International Festival of Language and Cultural Organization, Dr. Ali Ursavas. Many of the honorable elected officials Congressman Al Green, Congressman Pete Olson, Mississippi State Senator Hillman T. Frazier, Texas State Representative Gene Wu, Texas State Representative Gilbert Pena, Houston City Controller Chris Brown, Houston City Council Member Mike Laster, Director of Education, City of Houston (On behalf of Mayor Turner), Juliet Stipeche, board Member of Houston Community College Neeta Sane, The Honorable Consul General of The Republic of Angola, Julia Machado, The Honorable Consul General of Indonesia, Bambang Setyobudhi,The Honorary Consul General of Belarus, Geert Visser, President of American Turkish Association, Ozlem ADRA , and president of IFLC, Dr. Ali Ursavas commemorated the students and festival organizers. As the festival continued with more spectacular performances the audience joined in to dance and sing along till the very end as everyone came together in the room to sing ‘Universal Peace” ! All in all, the program offered a great time in an exciting ambiance to the audience and depicted the multicultural and diverse face of city and our nation.