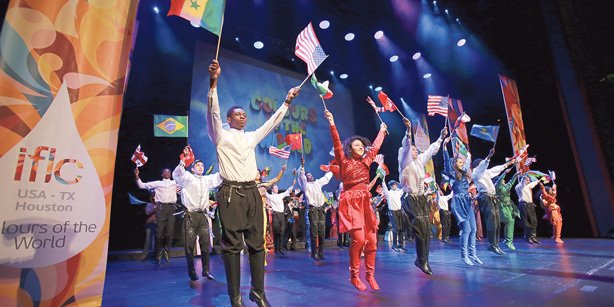 One hundred students from around the globe performed at the 14th edition of the International Language and Culture Festival, held in Houston, Texas. (Photo: Cihan)

The ceremony was held at the Hobby Center for the Performing Arts in Houston, Texas, in front of 3,000 attendees. Some 100 students from 13 countries took to the stage during the event and nearly 2,500 students from 150 countries will take part across the globe in various ceremonies for this year’s festival.

Congressman Al Green and Pete Olson also attended the event as the Raindrop Foundation, which held the event, was awarded two certificates of merit on behalf of the state of Texas.

Delivering a speech at the event, Green said that wars could be ended together with the initiators of peace and the world could be turned into a safer place for future generations. Referring to “What a wonderful world,” one of the songs sang during the event, Green said the world is excellent because of the brilliant young people in it, adding that people can live in co-existence and bring peace to the world.

After his speech, Green called on Siwar Andolsi, a student from Tunisia, and gave a certificate of merit to him.

Another speaker, Olson, thanked the Turkish-American society for its contribution to multiculturalism with such an activity. He said it was a source of pride to host such an event and different cultures at the festival, which has given them a chance to express the pride they have felt.

The festival is dedicated to the cultivation and education of youth and the creation of a platform to share cultural heritage with peers around the world.

The first 11 editions of the event were hosted in Turkey, but the organizers have decided to hold the event in various countries since 2014.

The International Festival of Language and Culture first started in 2003 with the participation of only 17 countries. Last year, however, more than 2,000 participants from 145 countries took part in the event.

The festival brings together hundreds of students from around the world each year. In 2014, the festival changed its name from International Turkish Language Olympiad to the International Language and Culture Festival.