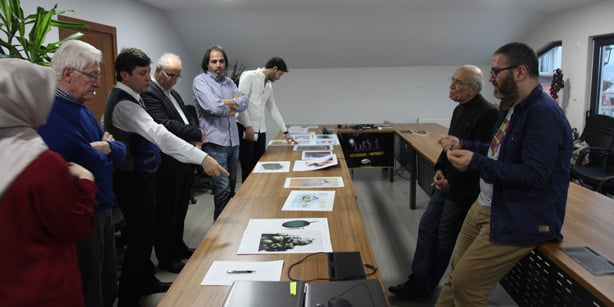 Cartoons were evaluated by a jury made up of famous cartoonists such as Tan Oral, İbrahim Özdabak, Muammer Kotbaş and Rudy Gyhesens. (Photo: Today's Zaman)

The “Refugees” competition was organized in order to raise awareness of the difficulties facing migrants who fled their homes to set out on dangerous journeys to Europe.

“We hereby invite all artists who want to draw attention to the refugee problem with their drawings to our cartoon competition,” the announcement on the organization’s website states.

The Samanyolu online news portal reported last Thursday that 1,250 people took part in the competition before its deadline on Jan. 29.

Cartoons were evaluated by a jury made up of famous cartoonists such as Tan Oral, İbrahim Özdabak, Muammer Kotbaş and Rudy Gyhesens on Feb. 4 at the Marmara office of Kimse Yok Mu.

Father Thomas Michel in his new book titled “Peace and Dialogue in a Plural Society: Contributions of the Hizmet Movement at a Time of Global Tensions” explores how Fethullah Gulen and his movement are one of those voices speaking most vocally in favor of a world community, where different faiths and nations can come together at one table to solve the multitude of problems facing today’s world.