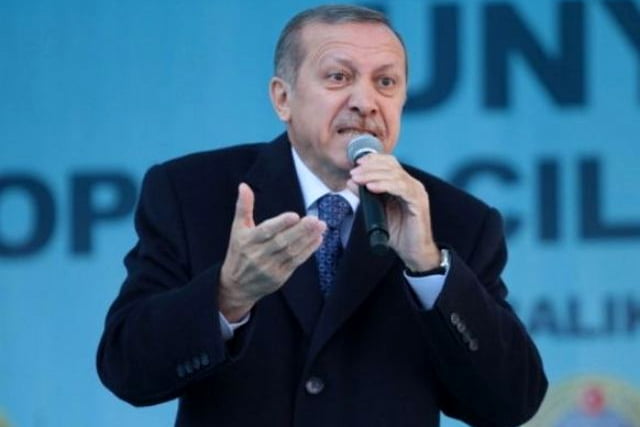 Although a wonderful picture has been drawn by the media which is close to the government, recently in Turkey things have not been ticking along. Turkey, the foreign policy theses of which have completely collapsed, is in a state of total isolation in the region.

The wave of excitement, which came forward as a result of the Arab Spring, has vanished after the situation in Egypt and Syria has become an impasse. The problems with the Iraqi government, the crisis with Israel, the latest American-Iranian rapprochement — all indicate a reality. Turkey is getting lonelier day by day in its foreign policy. To cap it all, the Gezi Park protests, prep school crisis and lastly the corruption case including charges against the sons of three ministers show us that just like in its foreign policy, the Justice and Development Party (AK Party) government is also on the verge of collapse in its domestic policy. Well, how did things come to this point?

These days, just like everyone else, I also have difficulty in understanding the tension which the country has been dragged into. How come we have touched the bottom unexpectedly and witnessed first the Gezi Park protests and then the prep school protests? In particular, Recep Tayyip Erdoğan’s confronting the Hizmet movement — with which he has been a close ally along Turkey’s democratization journey since 2002 — indicates that a serious mistake has been made. In this matter hundreds of comments have been written from different perspectives. If the country has been polarized to this extent, the situation should also be evaluated from Erdoğan’s leadership perspective. Did the situation get more serious and bigger because of Erdoğan’s mistake? Why did Erdoğan make a faux pas this time?

In order to understand this question I reread the great book of Sun Tzu, “The Art of War.” Although Erdoğan is accepted as a high-profile, smart and charismatic leader, what went wrong this time? Let’s see what Sun Tzu says on this matter.

While reading the book in order to detect the flow of events, the most striking statement I encountered was this: “There are roads which must not be followed, armies which must be not be attacked, towns which must not be besieged, and positions which must not be contested.” Erdoğan’s most serious problem is this. Based on the fact that he has come out successful in every crisis he has encountered, he always uses the same strategy to overcome difficulties. I call this the “curse of winning every battle.” Until this year, Erdoğan has almost always won his battles. He has defeated the opposition in every election since 2002 and he was able to send the army to its barracks. Today, he is serving as the head of the most powerful government in Turkey’s history. For this very reason, Erdoğan and his followers think that he is undefeatable. That’s why he never does the things that need to be done before entering into a battle. In order to clarify what I mean I go to Sun Tzu again: “If you know the enemy and know yourself, you need not fear the result of a hundred battles. If you know yourself but not the enemy, for every victory gained you will also suffer a defeat. If you know neither the enemy nor yourself, you will succumb in every battle.” Erdoğan doesn’t do a cost-and-benefit analysis of the fights he enters and he even doesn’t try to analyze the strength of his opponents and attacks them thoughtlessly. When he realizes that he will sustain more harm than his opponents, it might be too late.

Another serious mistake of Erdoğan’s is that he turns the problems he is unable to solve into existential crises. As he doesn’t have even a shadow of toleration for a step back, he binds the problems to foreign intervention, the interest lobby, dark forces, parallel inner state circles, Israel and the US and claims that the only aim of this opposition is to destroy the AK Party and destabilize Turkey. The people who don’t want to give up the stability that came with the AK Party period feel themselves obliged to support Erdoğan voluntarily or involuntarily. Although this tactic brings a short-term victory, in the long run it inflicts a deep wound within the society. Erdoğan will definitely understand that although his tactic would bring victories in the short run, they are like the Pyrrhic Victory which causes the devastation of both sides, and maybe he will also say that “another such victory and I come back to Epirus alone,” as the Greek King Pyrrhus said. His pride is overshadowing his reason and this causes great damage to the country.

To sum up, Erdoğan is a great warrior but not a great leader because he doesn’t know where to stop. As his pride overshadows his reason he considers winning battles as equal to having success, whereas even winning 100 battles may not mean you win the war. Despite winning many battles, Germany couldn’t win WWII. Hannibal could almost always win his battles but he lost the war with Rome. Napoleon’s end was not different than that of the others.