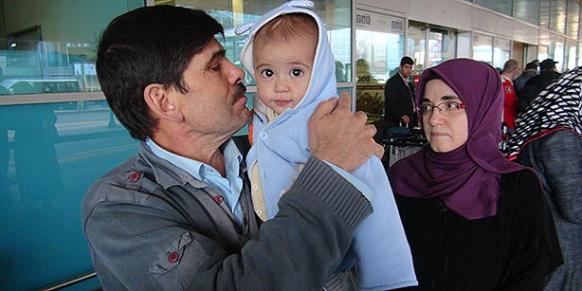 It took more than five days of waiting before the Turkish nationals were able to board a plane to leave Yemen after Sanaa's international airport was seized by Houthi rebels. (Photo: Cihan, Osman Arslan)

It took more than five days of waiting before they were able to board a plane to leave Yemen after Sanaa’s international airport was seized by Houthi rebels, who now control who can enter and exit the capital.

Saudi General Ahmet Asiri, the spokesperson of the Saudi-led coalition forces that recently began airstrikes to oust the rebels, claimed that Houthi forces at first did not let the Turkish Airlines plane land in Sanaa, forcing it to fly to a Saudi airport at Jizan, a port city near the Yemeni border. However, the Houthis subsequently allowed the Turkish plane to land in Yemen to evacuate Turkish citizens, Asiri told reporters at a news conference in Riyadh.

Turkey has joined other countries such China and Russia in evacuating its citizens, with more than 200 nationals having been flown from Yemen.

The plane carrying the evacuees flew from the Yemeni capital to İstanbul, Turkish Foreign Minister Mevlüt Çavuşoğlu wrote on his Twitter account on Sunday. When the plane landed at İstanbul Atatürk Airport on Sunday, evacuees expressed feelings ranging from joy at being reunited with their families back in Turkey to sadness at leaving behind the country in which they had lived and worked. Some of their children were born in Yemen and after their arrival in İstanbul, some elderly relatives were for the first time able to meet in person their grandsons and granddaughters.

Many of those evacuated spoke of the ordeal they had been through after Saudi Arabia, backed by a number of other Arab countries, launched airstrikes to stem the steady advance of Houthi rebels.

The airstrikes have led to the intensification of the war and brought additional burdens to the Turkish nationals living in Yemen. On February, Turkish diplomatic stuff fled Yemen after shutting down the Turkish Embassy in Sanaa, calling on Turkish citizens to follow suit. A call from the Turkish Foreign Ministry urging Turks to leave Yemen went unheeded, with most Turks voluntarily preferred to remain in the country despite the challenges making life challenging.

In first days of the air campaign, classes continued in the basement of the school; however, after assessing the situation, the school administration decided to close the school and send students home. The Turkish teachers and administrators have been praised for remaining in the country since the start of the conflict last September, when Houthi rebels attacked the capital. The country since has since slipped into an intractable cycle of violence and has become a proxy in power struggles between larger regional neighbours.

However, the Saudi-led operation has changed everything and made it much harder to remain in Yemen, Karagöz pointed out. Yemen’s Education Ministry did not close down the country’s schools until the start of the airstrikes. “We couldn’t leave before, while the schools were open. But now everything has come to a halt,” Karagöz said. He also expressed his wish to return to Yemen once the crisis is over.

Ayşe Oğuz, who arrived in Turkey along with her husband and one-year-old son, said that the airstrikes were more intense at night. “There was nothing much during the day, but there were huge explosions at night. We were safe at home when we didn’t go out,” she said.

Children who arrived in Turkey said they felt frightened by the sounds of the aerial bombardment. While almost all teachers from the Turkish school have gone to Turkey, the principal — along with a few others — has remained in Sanaa. One common theme shared by those who spoke to Today’s Zaman is that the coalition forces generally conduct their airstrikes at night. Life during the day continues as usual, one evacuee noted.