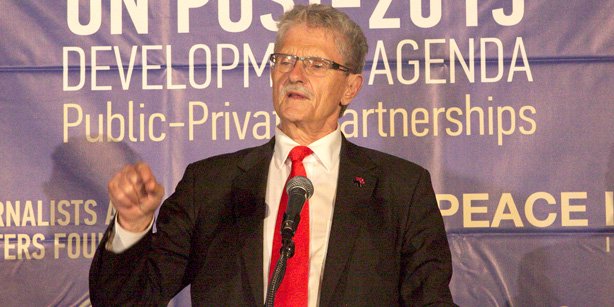 The president of the 70th session of the United Nations General Assembly Mogens Lykketoft has given a speech in the reception by GYV. (Photo: Cİhan)

Ministers, academics, bureaucrats, entrepreneurs, opinion leaders and nongovernmental organization representatives from all over the world attended a reception held by the İstanbul-based Journalists and Writers Foundation (GYV) at the Waldorf Astoria Hotel in New York on Wednesday.

The reception, which was sponsored by the Peace Islands Institute (PII) and the African Union, came after a panel titled “Development Agenda: Contributions of Private Sector and Civil Society.” This panel was also organized by the GYV with the same sponsors and representatives of more than 60 countries at the UN headquarters in New York attended.

Former Danish Foreign Minister Mogens Lykketoft, who was elected president of the 70th session of the United Nations General Assembly, said at the reception that the UN had a wide agenda on sustainable development and that its agenda concerns all countries and people in the world. Lykketoft also said that the UN believes it is not possible to erase poverty unless people fight against inequalities both within and between countries.

Lykketoft added that climate change and environmental disasters are causing poverty and restricting sustainable development and could destroy the resources that people need to survive.

Malawian Foreign Minister George Chaponda also spoke at the reception, saying in a speech that the private sector and NGOs should work together for sustainable development. Chaponda also praised the Turkish schools and NGOs in his country, saying: “The Turkish schools are doing a great job. Education is one of the keystones of sustainable development for us. Raising the quality of education for children changes the future of a country dramatically.”

Former Beninese Foreign Minister Mariam Boni Diallo also spoke about the Turkish schools in her country, saying that she was a little worried when they schools first opened but they have won the approval of society. “Students’ parents are content with the schools,” Diallo said.

GYV President Mustafa Yeşil described the reception as an important event in which the private and public sectors came together to support sustainable development.

Speaking in the morning session of the GYV panel, Central African Republic (CAR) Education Minister Eloi Anguimate underlined the contribution of civil society to the development of countries through education. Stating that it is impossible to achieve sustainable development only via governments, Anguimate praised the activities of the Gülen movement, a civil society movement inspired by Turkish Islamic scholar Fethullah Gülen that is active throughout the world, including in the CAR.

Noting that he had traveled to Turkey two months ago and had talks with officials from Turkish charity Kimse Yok Mu (Is Anybody There?), which is also inspired by the Gülen movement, Anguimate said that he had asked them to open more educational institutions in his country, which he said provide a high-quality education.

The minister underlined that education is needed not just for development but also to establish peace and stability in the country, adding that chaos, violence and migrant tragedies witnessed in various countries across the world can only be prevented through education.

GYV Deputy President Hüseyin Hurmalı also delivered a speech at the panel, saying that the GYV has contributed to the UN’s Sustainable Development Goals for 2030. The UN’s Sustainable Development Program includes goals to improve cooperation between state institutions and the private sector, Hurmalı said, adding that the Gülen movement is supporting these goals in its activities across the world. “We organized this panel to share inputs and outcomes on this issue,” he added.

The Gülen movement is made up of volunteers engaged in interfaith and intercultural dialogue inspired by the ideas of Gülen, whose teachings promote mutual understanding and tolerance between cultures. Now residing in the US, Gülen has pioneered educational activities in a number of countries, along with efforts to promote intercultural and interfaith activities around the world.

Michael Martin Garrett The Muslim holy month of Ramadan is known throughout the world as a period of fasting, but equally important to the month’s cultural history are the street celebrations where adherents come together each night to break their daily fast. State College got a small taste of this celebratory aspect of Ramadan – […]