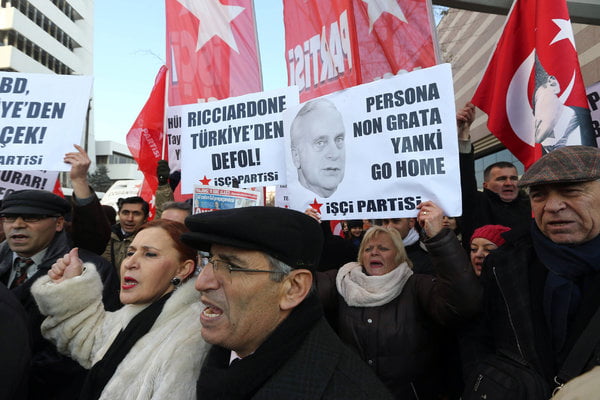 Hours later, Erdogan Bayraktar, the environment and urban planning minister, announced his resignation in an interview with the private NTV television network. Bayraktar’s son was detained as part of the corruption probe but later released.

Mr. Erdogan’s government has denounced the inquiry as a politically motivated plot against his government by a “criminal gang” within the state. The prime minister’s allies have also characterized it as a foreign plot to undermine Turkey’s rise and damage the government in advance of elections in March. Responding to the investigation, the government has dismissed more than a dozen high-ranking police officials as part of a purge of those it believes are behind the probe.

The investigation has been linked to the followers of Fethullah Gulen, a reclusive Muslim preacher who lives in Pennsylvania and leads one of the most influential Islamic movements in the world. He has millions of followers and an expansive network of business, media outlets and schools, as well as sympathizers who are believed to have a strong influence over Turkey’s police and judiciary.

In the past, the Gulen movement has provided vital support to the conservative, Islam-inspired government of Mr. Erdogan, and the Gulen-affiliated media have attacked common opponents and backed controversial trials that Mr. Erdogan has publicly supported. But in recent years, a perceived rift has appeared to have grown between the men, as Mr. Gulen has challenged Mr. Erdogan in key areas, including foreign policy.

Mr. Gulen, who rarely gives interviews, has emphatically denied any involvement in the investigation. His sympathizers have also said that the characterization of Mr. Gulen as an influential puppet master over the Turkish state are exaggerated and aimed at undermining the movement.

The investigation, which has been directed at sons of government ministers, municipal workers and businessmen, including a powerful construction tycoon, began last week with a series of dawn raids on the offices of businessmen close to the prime minister. The Turkish media has reported that $4.5 million in cash was found packed in shoe boxes in the home of the chief executive of a state-run bank, while a money-counting machine and piles of bank notes were reported to have been discovered in the bedroom of a government minister’s son.

The inquiry could prove to be one of the most potent challenges yet to the government of Mr. Erdogan, which was buffeted this summer by large demonstrations of mostly liberal and secular-minded antigovernment protesters in a cherished Istanbul park who were angry at what they perceived as Mr. Erdogan’s authoritarian tendencies.

Mr. Erdogan’s intervention in the inquiry has drawn criticism from within his Justice and Development Party and threatens to undermine the unity of the party, known for its discipline, before a series of elections scheduled for the next 18 months.

*Editor’s note: Hizmet Movement Blog reaffirms its non-endorsement policy of the various viewpoints expressed throughout the articles that are solely shared for the convenience of the readers.