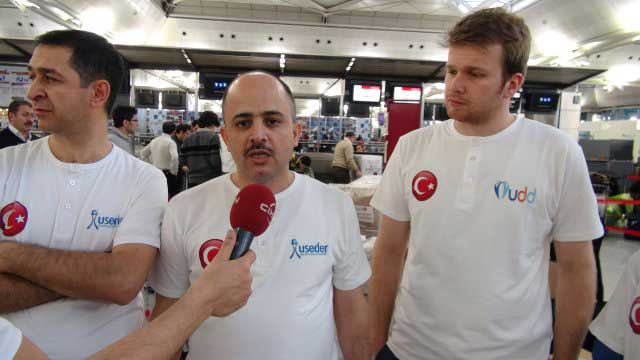 Minister of Public Health, Social Affairs and Humanitarian Action Marguerite Samba of the Central African Republic (CAR) has expressed gratitude to the Global doctors Movement, a Turkish organization, for their assistance and medical services.

Doctors from the organization went to the CAR on Feb. 20 and stayed there for 10 days. While there the doctors conducted numerous operations and checkups in four districts of the country’s capital, treating 500 children, 400 patients with dental problems, 100 patients with gynecologic disorders, 100 patients with urologic diseases and 250 patients with eye disease. The group consisted of a pediatrician, family physician, anesthesiologist, ophthalmologist, urologist, cardiologist, gynecologist and three dental surgeons and was separated into four groups: urology, gynecology, dentistry and pediatrics-circumcision.

The Global Doctors Movement (Küresel Doktorlar Hareketi), which has 20,000 members and many subsidiary associations across Turkey, has carried out more than 300,000 medical check-ups and performed some 15,000 surgeries in more than 40 countries in the past couple of years.

Samba thanked the doctors on behalf of the CAR and said the assistance provided by the doctors is an example for future cooperation between the two countries. She also pointed out that they had made a significant sacrifice going to the CAR to provide medical services despite the risks they faced.

About 40 congressmen of Egypt Parliament visited the Salahaldin International Turkish School in Cairo. They had dinner at Turkish School with their families before their upcoming trip to Turkey. Turkish ambassador to Egypt Huseyin Avni Botsali hosted the dinner. Students of Turkish school sang songs in Arabic and in English after the dinner. Botsali mentioned […]