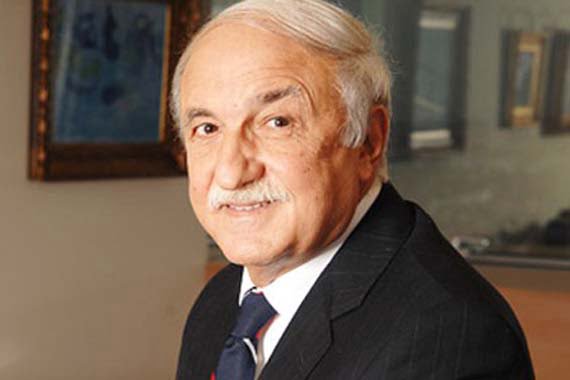 FIBA Holding chairman of the board Hüsnü Özyeğin says Turkish Olympiads are more important than international Olympiads, and that foreigners want his backing for enrolling their children in Turkish schools.

A group of students currently in Istanbul for the 11th Turkish Olympiads, which was arranged by International Turkish Language Association (TÜRKÇEDER), visited FIBA Holding chairman of the board, Hüsnü Özyeğin and his son, Murat Özyeğin. Mr Özyeğin received students in the holding’s building in Levent, said he was very pleased with the visit. The famous businessman stressed the importance of Turkish Olympiads held annually in Turkey and said: This is an event to be proud of. Turkish Olympiads are great source of pride for us. There is no example of it in the world. I think it is more important than international Olympiads. This is about the world of the future. This is about sewing the world of the future, stitch by stitch.

We have Turkish school graduates at our companies abroad

Noting that the students studying in Turkish schools abroad are very lucky, he continued: The bond and experience that you have established between yourselves is a great opportunity, since they will affect your future life. We know and observe the quality of education you receive. We hired young people graduated from schools in Russia and Romania to our companies in those countries. We personally observe the quality of their education, the effectiveness of their management and communication skills.

Mr Özyeğin noted that in recent years, Turkish companies that have undertaken large projects abroad, were faced with the problem of finding qualified employees and that Turkish schools have greatly facilitated this problem. He further said: Turkish schools prepare the personnel you need in the best possible way. They familiarize people in those countries with your country and your culture. You do not feel alienage when you go there. Thanks to these schools, Turkish companies acquired a very large business doing capacity. In our companies abroad, we employ graduates of Turkish schools. In many countries, people who have graduated from your schools are working in our companies. They form a bond between us and those countries. And we are very pleased with this.

Some locals even asked me to pull strings for their children

Noting that he knows the quality of schools abroad and has witnessed it firsthand, Mr Özyeğin revealed that some people in certain countries have asked for his help for enrollment in Turkish schools. Mr Özyeğin recounted an event about Turkish schools, between him and a minister: Ukrainian ministers even asked for my backing for enrolling their kids in Turkish schools. Think about it, top-level names of the country are using all their relationships just to be able to send their kids to your schools.

During the visit, Mr Özyeğin talked generously with the students and shared his career experiences with them, and he couldn’t hide his astonishment when the students told him all the foreign languages they could speak. When a student from Ukraine said that they learn six languages in their school, Mr Özyeğin expressed his amazement by saying: This is truly unbelievable. When another student from Northern Iraq said that they learn Kurdish, English and Arabic in their school, Mr Özyeğin said: This is it. If I were to open a bank in Diyarbakır and reach customers there, I would immediately hire this young lady. And it is enough to hire her. She will be able to communicate with Kurdish speaking people, Arabic speaking people, English and Turkish speaking people as well. It is hard to raise people of this quality. Turkish schools manage it very well. I think there cannot be a better ‘wise person’ than this young lady, he said.

Hüsnü Özyeğin’s son Murat Özyeğin said: When I saw the students I felt really proud. It is a very impressive and amazing thing. He expressed his excitement when he met the students, and said: When we saw them, we understood what a wise decision we have made by supporting Turkish Olympiads through a sponsorship of one of our companies. Once again, we understood the significance of our little support.