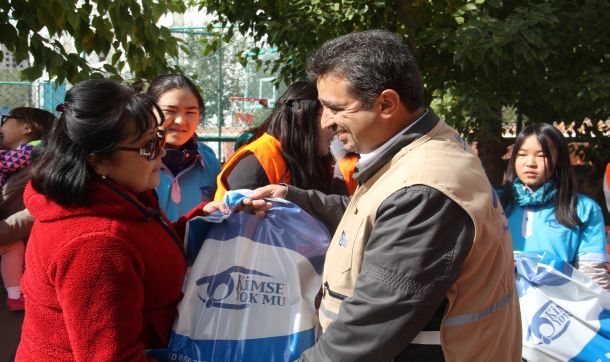 Along with the volunteers of Khen ch Baikhgui Yu, partner organization of Kimse Yok Mu, meats were provided to needy families across Mongolian Capital City of Ulan Bataar. Families who provided by the meat was thanked those people who did not forget themselves.

Önder Çolak, A Kimse Yok Mu official said Kimse Yok Mu which took the roads with the message of goodness and became a world brand with the help of our volunteers is reaching out its helping hand to needy people in every corner of the world.

“We finished sacrificing sheep and cows and as is seen the distribution is ongoing. Under the supervision of Social Affairs Directress of Municipal, distribution of the meat is being held by our volunteered students, and volunteered people among the people. This can be described as to set heart bridges between the countries. We would like to thank to Turkish benefactors who granted donations to set these bridges. We are waiting your donations. We felt happiness for being a part of such a program. We also would like to thank both to benefactors and our organization,” noted Çolak.