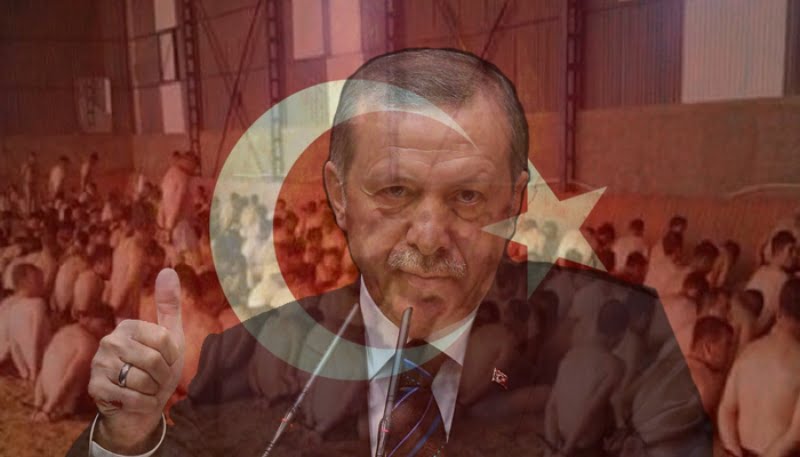 Fifty-six-year-old Tahsin Uysal used to worked as a teacher in the southern Turkish city of Adana. He’s one of tens of thousands of civil servants who lost their jobs after the failed June 15, 2016, coup. The workers were accused en masse of being members of a terrorist organization and were fired by decree.

Uysal is accused of being a member of a trade union with ties to the Gulen movement. The leader of that movement, preacher Fethullah Gulen, has been living in exile in the US for years. The Turkish government claims that Gulen and his followers were behind the attempted coup.

For decades, those in the Gulen movement held high-level government posts. They ran schools, unions and banks. Today the government treats those with accounts at such banks or children attending such schools as terror suspects.

As a result, entire families have suffered reprisals. The government has cut welfare and medical payments for their elderly and infirm relatives. In Turkey, these people even have their own acronym, they are called KHKs, in reference to the official government term for decree, “Kanun Hukmunde Kararname.” After being fired, Uysal was thrown in jail for eight months.

Upon his release, the ex-teacher decided to draw money from his retirement account. Months passed before he could find a public authority willing to process his request. When Uysal finally received a retirement statement, he learned that his payment had been refused. He challenged the decision in court and won. But the damages awarded to him were barely enough to cover his legal costs. Moreover, authorities froze his bank and credit card accounts.

To make matters worse, state prosecutors mounted a legal challenge to his release and Uysal was sentenced to another six-and-a-half years in jail. The sentence is currently pending and must now be reviewed by Turkey’s supreme court.

His family has also been subjected to the long arm of the Turkish state. His daughter, an academic, was jailed because of her father’s union membership. Although she was found innocent of wrongdoing by the courts, she’s been forbidden from returning to work.

These developments have scarred Uysal’s family. His wife was recently diagnosed with cancer. Even so, Uysal is optimistic: “We won’t stop fighting. Someday, all of these injustices will come to light. We aren’t armed terrorists, and we aren’t enemies of the state. My only sin is that I joined a union.”

In all, some 134,000 people have been fired from different parts of the civil service since the failed putsch. Those affected have taken to internet forums to chat with one another about their experiences. The list of injustices that have been cataloged is long, and range from stories of desperately seeking work or being arbitrarily refused care by doctors to having passports confiscated.

Students have lost stipends, while others say no one will rent apartments to them. Those who have been caught up in the purge say they are the victims of “social lynchings.”

According to official statistics, 126,000 people have filed applications with Turkey’s State of Emergency Commission to resume work. So far, the commission says it has processed 78% of those applications – and has turned down 88,700 of them. To date, only 9,600 people have been allowed to return to their former jobs, and 28,000 KHKs are still waiting to hear their fate.

Omer Faruk Gergerlioglu, a doctor and a parliamentarian from the pro-Kurdish HDP party, is also a KHK. He is also the only Turkish parliamentarian that has spoken out over the issue. He says Turkey is in a permanent state of emergency, more than three years after the coup.

“Millions of people are still feeling the repercussions,” he says. “Many search in vain for private sector jobs, many are refused the right to travel abroad. They are not allowed to make use of federal employment agencies, and city authorities prohibit them from starting their own businesses. Often, they are not even allowed to withdraw money sent to them from abroad.”

Gergerlioglu is indignant, saying, “These are Nazi methods, designed to break people.”

From teacher to janitor

B.O., who does not want to see his name in print, is 33 years old and a history teacher by profession. He, too, has experienced a turbulent life since the coup attempt was put down. He, too, was fired and then thrown in jail. He was accused of using the Turkish messaging app ByLock to send encrypted messages. After it became known that his messages — like those of many others — had been rerouted to ByLock without his knowledge, he was acquitted. The Turkish government claims the app is used exclusively by members of the Gulen movement.

After his acquittal, B.O. was unemployed for months. Hoping to continue providing for his wife and children, he moved to another city to look for work. There he found a job as a janitor. But he was fired three days later after it was discovered that he was a KHK. Eventually, he found another janitor position, where he was able to work for a year. But meanwhile, the financial assistance he was receiving to care for his sick mother-in-law was cut. Now, he himself has been diagnosed with cancer and is desperately trying to beat it.

‘More psychologically damaging than an earthquake’

Haluk Savas is a professor of psychology and a KHK. His professional assessment of the situation is devastating: “These people suffer great psychological stress because they feel as if they have become social outcasts. Trauma researchers now know that beyond exhaustion and physical illness, the pain that people inflict upon one another has more grave psychological consequences than the trauma of events like earthquakes.”

Savas says that hundreds of thousands of people directly affected by the firings as well as millions of their relatives are suffering from post-traumatic stress disorder (PTSD), something previously only diagnosed in those who have suffered abuse, fought in wars, or survived serious accidents. He says they are condemned to grapple with events from their past, suffering insomnia and plagued by nightmares.