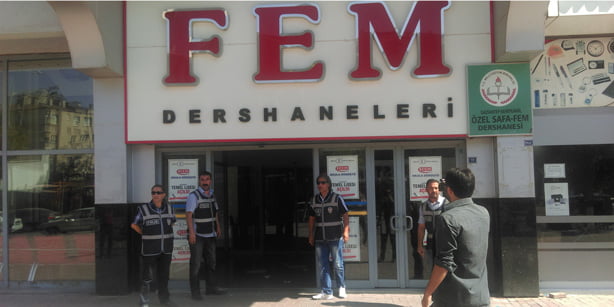 Eight institutions owned by the Safa Education Institution were raided by the police along with inspectors from several ministries and institutions. (Photo: Cihan)

According to the Cihan news agency, the Gaziantep Governor’s Office authorized the raids in a written order. Police officers from the anti-smuggling and organized crime unit were accompanied by inspectors from seven government bodies, including the Ministry of Education, the Ministry of Food, Agriculture and Animal Husbandry, the Social Security Institution (SGK) and the Gaziantep Metropolitan Municipal Fire Department.

Zakir Kömürcü, the principal of Fem prep school’s İncilipınar branch in Gaziantep, spoke to Cihan criticizing the police raids of private and prep schools. “The mountains are full of bandits and they are killing the police. You come [here] to raid education institutions. Enough is enough. This tyranny is enough. [Inspectors from] the Education Ministry have come to inspect [this Fem prep school branch] four times since last year. Why do police officers come [here]? This is an educational institution,” Kömürcü said.

According to a written statement released on the website of the governor’s office, the police seized several documents and computers based on claims that the institutions were involved in tax evasion. According to the statement, the simultaneous raids were conducted by the anti-smuggling and organized crime unit of the Ağrı Police Department on Aug. 14, and a large-scale investigation is under way.

The raids are part of a nationwide crackdown on institutions and individuals sympathetic to the Gülen movement, popularly known as the Hizmet movement, inspired by the teachings of Turkish Islamic scholar Fethullah Gülen. President Recep Tayyip Erdoğan accused the movement of orchestrating a graft investigation against him and his inner circle, a claim the movement has repeatedly denied. Since the allegations surfaced nearly two years ago, the authorities have escalated raids, shutting down or making allegations against institutions or individuals close to the movement.