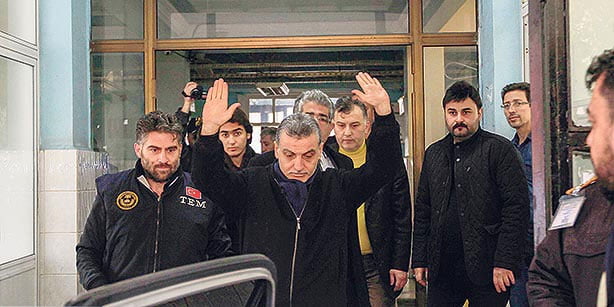 Journalist Karaca was arrested on Dec. 19, 2014 based on a soap opera script, as part of a government-orchestrated crackdown on the media. (Photo: Cihan)

The report, drafted by Supreme Court of Appeals honorary president Sami Selçuk and emphasizing the lack of legal grounds for Samanyolu Broadcasting Group CEO Karaca’s arrest, was submitted to the Constitutional Court by Karaca’s lawyers on Tuesday.

The report was submitted as an appendix to a previous individual application with the Constitutional Court on April 25, in which Karaca’s release had been requested.

In the report, Selçuk argues that detaining an individual for airing a soap opera does not have legal basis.

Karaca is accused of sending an encrypted message to police officers to arrest the leader of an al-Qaeda-linked group in eastern Turkey via an episode of a soap opera on samanyolu TV six years ago.

“The invention of fake evidence from an imaginary [script] of a soap opera is unprecedented in the criminal trials of Turkey’s history,” said Selçuk in the report.

It was further noted in the report that the ruling of the İstanbul 32nd Court of First Instance for the release of Karaca and 63 police officers should be enforced as any failure to abide by the ruling would constitute a breach of the Constitution.

The ruling of the 32nd Court of First Instance on April 25 was not enforced by public prosecutors and the two judges who made the rulings were later arrested on May 1.

Karaca, who is currently being held without indictment and with no reason given for the recent extension of his detainment, was arrested as part of a government-orchestrated major media crackdown on Dec. 14, 2014. The operation came just three days before the first anniversary of massive corruption investigations revealed to the public on Dec. 17 and 25, 2013, which implicated prominent politicians, ministers, businessmen and people among the inner circles of the Justice and Development Party (AK Party) and President Recep Tayyip Erdoğan.

Other detainees, including Zaman Editor-in-Chief Ekrem Dumanlı, have since been released pending trial.

Selçuk also said in the report that the arrest warrant issued by the İstanbul First Penal Court of Peace for Turkish Islamic scholar Fethullah Gülen on December 2014 over allegedly leading an armed terrorist organization was “political” and based on “rumors.”

The accusations brought against Gülen were based on a speech posted on his website Herkul.org on April 6, 2009 in which he allegedly defamed the leader and several members of an al-Qaeda-affiliated group known as Tahşiyeciler (Annotators.)

The arrest warrant for Gülen was accompanied by the court’s request that the scholar be extradited from the US.
Selçuk called the accusations leveled against Gülen “political,” adding that foreign countries typically do not extradite individuals who face such accusations.

He further added that the court’s extradition request of Gülen harms the reputation of Turkey in the eyes of the US, where Gülen currently resides.

The campaign against Gülen and the Gülen movement began after the major graft investigations incriminating government figures went public in 2013.