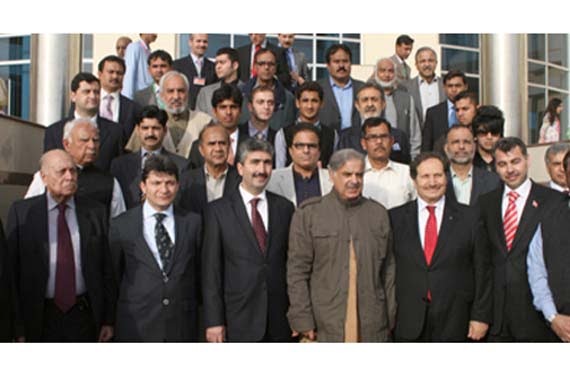 LAHORE – Punjab Chief Minister Shahbaz Sharif has said that Pakistan and Turkey enjoy brotherly and friendly relations and, with efforts of the Punjab government, mutual ties between the two countries are transforming into economic cooperation.

He was addressing the foundation-stone laying ceremony of a school under the Pak-Turk International Schools and Colleges System at Khayaban-e-Amin in Lahore on Tuesday.

The chief minister said that it was a matter of honour for him to attend the foundation-stone laying ceremony of the new school under Pak-Turk School System.

Shahbaz said that there was a strong bond of mutual love and brotherhood between both the countries which was reflected by the decision of Turkish businessmen and government authorities to celebrate Eid with their flood affected Pakistani brothers.

He said the people of Turkey had a great affection for Pakistanis and it would not be wrong to say that Pakistan and Turkey were two countries but one nation. Shahbaz praised Turkish Ambassador Mustafa Babur Hizlans’ efforts to deepen mutual ties between Pakistan and Turkey.

He acknowledged Pak-Turk Education Foundation’s role in the promotion of quality education in Pakistan and imparting modern knowledge to the younger generation.

He said development projects, worth over Rs50 billion, were being expeditiously completed with the collaboration of Turkish companies and the Metro Bus Project was significant for transport of Pakistan. The critics of public welfare projects have no interest in solving problems of the masses, he added.

He said that we would have to promote our own resources to achieve dignity and respect in the world, stressing the need to adopt principles of love, sacrifice, honesty and hard work for the progress and prosperity of the country.

Addressing on the occasion, Turkey Ambassador Hizlan said that 19 educational institutions were operating in Pakistan under the auspices of Pak-Turk International School System and their number would further be increased.

Myrat says he feels safe now in the United States, but feels heartbroken for his friends who couldn’t escape. “It’s so sad. You cry. And for what? Going to a school, reading some books.”