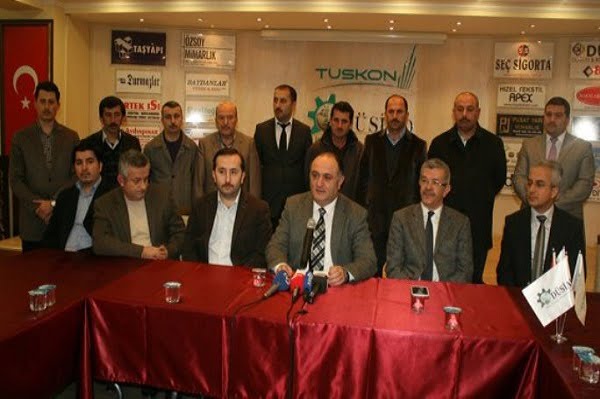 Dozens of CSOs across Turkey have been holding press conferences or releasing press releases to condemn an ongoing defamation campaign being conducted against the Hizmet movement inspired by Turkish Islamic scholar Fethullah Gülen.

In Düzce province, five CSOs held a joint press conference on Friday, calling on top government officials to keep from making defamatory remarks that could polarize the public. Speaking on behalf of the CSOs, President of Düzce Industrialists and Businessmen’s Union (DÜSİAD) Eyüp Çakır said that they are following the rising tension in the country, the fluctuations in currency markets and the recent economical developments with concern.

He pinpointed defamatory expressions being used against the Hizmet movement, such as “parallel state,” “gang,” “virus,” “secret organization” and even “Hashashin” — a shadowy historical group that carried out politically motivated assassinations during the time of the Seljuk Empire. Çakır said that any person using hateful language should stop immediately. He added that the democratic steps taken by the government after a Sept. 12, 2010 public referendum held on its constitutional amendment package should not be reversed.

Referencing the government’s repeated argument that there is a “parallel state” within Turkey, Çakır said people are being forced to take sides in this argument and that if there really is a parallel structure within the Turkish state, it should be exposed and necessary measures should be taken. Indicating that the government has to back up its argument with concrete evidence and documents, Çakır said that the Hizmet movement, which is made of volunteers serving their nation without any financial expectations, doesn’t deserve such harsh, defamatory statements.

Speaking with reporters on Thursday evening, the Isparta-based Association of Iranian Industrialists and Businessmen’s (ISİAD) president, Özcan Pınarcı, commented on the hate speech directed at Hizmet movement followers by government officials after a corruption scandal erupted in December of 2013. He echoed Çakır, listing the defamatory phrases being thrown at the Anatolian people who merely wish to serve their nation.

Pınarcı said his organization cannot believe the harsh expressions and accusations being used against Gülen, who he sees as one of the most distinguished people to have risen from Turkey and someone who has no other intention except to serve his nation.

Another five CSOs gathered in the Manavgat district of Antalya province on Thursday to support the Hizmet movement. Speaking on behalf of the CSOs, the Manavgat Entrepreneurial Businessmen’s Association (MAGİAD) President Mehmet Kaba said government officials should stop their hate speech, should stop hurting the public conscience and should adopt more inclusive rhetoric.