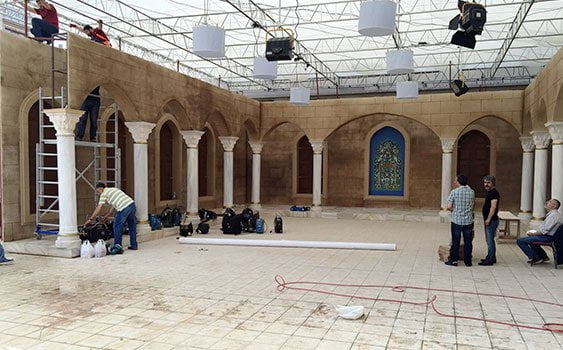 In a letter to Samanyolu TV responding to the broadcaster’s request, the mufti’s office said permission for Samanyolu TV and Mehtap TV to broadcast live from Küçük Selimiye Mosque and Atik Valide Mosque during Ramadan had not been granted. The letter was signed by İstanbul Mufti Rahmi Yaran.

The Samanyolu Group, whose chairman Hidayet Karaca is in prison as part of a government-orchestrated operation carried out on Dec. 14 of last year, sent a letter to the mufti’s office on May 22 requesting permission for Samanyolu TV and Mehtap TV to broadcast live during the iftar (fast-breaking) and sahur (pre-dawn) time slots.

However, state-run broadcaster Turkish Radio and Television Corporation (TRT) and the pro-government ATV were granted permission to broadcast live from Sultanahmet Mosque and Eyüp Sultan Mosque, the two biggest attractions for people in İstanbul during Ramadan.

Meanwhile, a group of municipal officials of the Justice and Development Party’s (AK Party) Üsküdar Municipality tried to stop Samanyolu from putting up temporary decorations, similar to the interior of a mosque, on the roof of one of its buildings last week. The officials left after they were informed by TV staff that the decoration was not permanent.

Last July during the holy month of Ramadan, Samanyolu TV was granted permission to broadcast live programs from the garden of Küçük Selimiye Mosque. However, minutes before iftar on July 11, municipal officials forced the Samanyolu TV crew out of the mosque’s garden where they were shooting a Ramadan program, despite the crew having permission from the authorities.

The municipal police first asked the crew from STV to leave before forcing them out, although the crew had presented the official document they had received from the mufti’s office and the Religious Affairs Directorate.

Since a major corruption probe became public on Dec. 17, 2013 implicating people close to the AK Party, media outlets close to the faith-based Gülen movement — popularly known as the Hizmet movement and inspired by the views of prominent Turkish Islamic scholar Fethullah Gülen — such as Samanyolu and Zaman have been targeted by the government.

The AK Party and President Recep Tayyip Erdoğan accuse sympathizers of the Gülen movement, especially those in the police force and the judiciary, of being part of a plot against the government by carrying out the graft probe. However, Erdoğan and AK Party circles have yet to present any concrete evidence proving their accusations. The Gülen movement has strongly denied all claims.

Samanyolu Group lawyers submitted a complaint to the İstanbul Public Prosecutor’s Office on Tuesday against Yaran on charges of restraining people’s freedom of religion, expression and opinion, discrimination and misconduct. The lawyers also appealed to an Administrative Court for a stay of execution for the decision of the mufti’s office.

According to Özden Demir, general manager of the Kaynak Publishing Group, barring the largest religious books publisher in the country from the 34th Turkey Book and Culture Fair is discriminative. Demir told the Cihan news agency on Tuesday that the reason for them not being allowed to participate in the fair is “limited space,” which he claims is not reasonable.

Demir said they were unable to register for space at the fair after being told by officials at the directorate of the decision. Demir also noted they have been participating in the fair every year since 2000 and never faced any problem before.

Kaynak Publishing Group consists dozens of publishers that publish books in different categories and languages. The group is also known as the publisher of the books of Gülen.