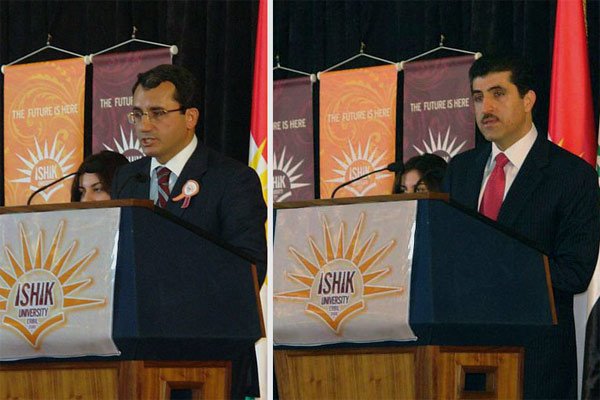 PM Barzani and Turish MS attend the opening of Ishik University in Erbil in 2008. On the right, Prime Minister Nechirvan Barzani; on the left, Turkey's then Consul General Mr. Ahmed Yildiz

ERBIL — The Turkish Consul-General to Erbil said on Thursday (July 28) the Kurdistan Regional Government (KRG) should recognize the Hizmet Organization of Turkish Islamic cleric Fethullah Gulen as a “terrorist organization.”

Mehmet Akif Inam, the Turkish Consul-General, said during a press conference on Thursday that he would direct requests to the KRG in the near future regarding the Hizmet Organization and schools run by the group in the Kurdistan Region.

The KRG Ministry of Education said it would abide by any decision made by the KRG Council of Ministers concerning the closure of the organization’s schools in the Kurdistan Region.

Sherko Hama Amin, a member of the Kurdistan Parliament’s Education Committee, told NRT that schools should not be shut down over political reasons, especially a political issue outside the region.

“There is no excuse to mix political issues with the closure of schools in the Kurdistan Region, especially a political event which occurred outside the region,” Amin said.

“The permission and closure of any schools in the Kurdistan Region must be in the frame of law and must not be connected to any political issue taking place in a neighboring country,” he added.

So far, tens of thousands of people in Turkey – including police, judges and teachers – have been suspended or placed under investigation since the July 15-16 coup, which Turkey says was staged by a faction within the military loyal to Fethullah Gulen.

The Turkish government is attempting to cut all branches connected to the Hizmet Organization internationally by pressuring the shut down of schools, universities, hospitals and charity organizations.

Western governments and human rights groups, while condemning the abortive coup in which at least 246 people were killed and more than 2,000 injured, have expressed concern over the extent of the crackdown, suggesting President Tayyip Erdogan may be using it to stifle dissent and tighten his grip on power.

SULTAN FAIZY, HERAT The second high school for girls built by Turks in Afghanistan recently opened its doors following an official ceremony. The school, built in Herat, is a continuation of benevolent Turks’ efforts to invest in Afghanistan’s future through building schools countrywide. The first such school was opened in Kabul. The opening ceremony was […]