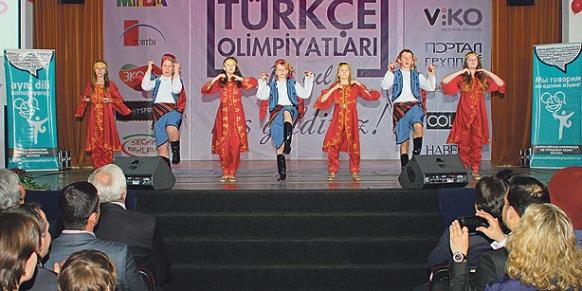 The elimination round of the Turkish Olympiad in Russia has been held in a prestigious concert hall where around 300 students showed their skills in the categories of poem recitation, singing, reading and writing.Many countries that are home to Turkish schools have been holding similar language and culture festivals this month to select students to compete in the 12th International Turkish Olympiad in June.

The students came from educational institutions in 11 provinces of Russia.

There was huge interest in the event from both Russians and Turks. It was attended by Turco-Russian Business Council Co-President Ahmet Muhammed Palankoyev, Mihail Meyer, head of the Institute of Asian and African Studies at Moscow State University, Association for Business and Friendship between the Russian Federation and Turkey (RUTİD) President Esat Sarı, Russian turcologists, representatives from Turkish business world and Turkish residents in Russia.

The audience was entertained with a kolbastı, a regional folkloric dance from Trabzon province in the Black Sea region. A Black Sea song titled “Koyverdun Gittun Beni,” performed by Nursultan Urozaliyev and Mariya Loseva, students at Astrakhan State University, received huge applause from the audience. The most outstanding students in each category were awarded gold medals.

Mihail Meyer, who is also head of the organization committee of the Olympiad, said in the opening speech of the event that the Turkish Olympiad helps Russians rediscover Turkey in many ways.

He also said that all participants in the Turkish Olympiads will have important roles in Russia in the future and they will make important contribution to the development of relations between Turkey and Russia. “I think the Olympiads will be organized dozens of times. And there will be the winners of this event, unlike myself, in the position I hold today. I offer my thanks to everyone who has taken part in the organization of this event,” he continued.

For his part, Ahmet Muhammed Palankoyev said that the Turkish Olympiad is of crucial importance for the development of commercial relations between Turkey and Russia.

“There is a direct link between the Olympiad and economic relations. … The development of commercial ties with a country depends on knowing the language of that country well. I see the Olympiad as the guarantee of our commercial relations with Turkey,” he said.

RUTİD’s Esat Sarı said that his organization will continue to support the Turkish Olympiad because it helps commercial ties between Turkey and Russia. “Turkish business groups have invested in Russia. Turkish-speaking Russians are important for the business world,” he said.

Turcologist Mariya Ripinkova from Moscow State University, who has been a member of the jury of the Olympiad for the past eight years, praised the Turkish language abilities of the students attending this year’s Olympiad, saying that the standard is very high.

“Students in Russia are interested in Turkey and Turkish culture. We are excited and happy about their enthusiasm. The Turkish Olympiad is a positive influence on relations between our cultures and helps the development of our relations,” she noted.