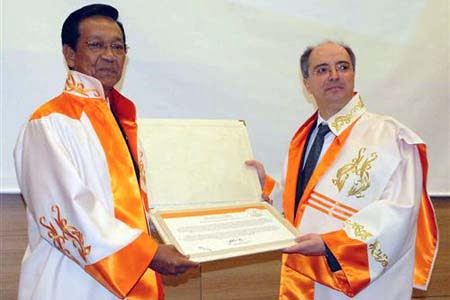 The Indonesian Sultan Sri Sultan Hamengku Buwono was granted an honorary doctorate by Meliksah University in Kayseri. In attendance of the ceremony were the chairman of Boydak Group Board Haci Boydak, the president of Kayseri Young Industrialists and Businessmen Association Hamdi Kinas and numerous academics and businessmen.

The deputy-rector Prof. Tankut Yalcinoz delivered the opening speech of the ceremony at the university. Yalcinoz said the senate of his university, which attaches great importance to projects in science, art and sports, is granting honorary doctorate degrees to those that proved themselves as effective in these fields and resonate with humanity. “The university senate, in this regard, has decided to grant honorary doctorate degree to Indonesia Yogyaharta Sultan, Hamengku Buwono. We are happy and thankful to have him at this ceremony.” Yalcinoz said. He got the sultan wear his doctoral gown and presented his degree certificate.

Next, Sultan Buwono gave his remarks in which he highlighted the long-established friendship between the two countries. He further said, “Turkey and Indonesia have been hand-in-hand building the world’s civilization. When choosing this title for myself, I, feeling responsible to history, wholeheartedly wanted to awake the hearts of culturally sensitive people. I wished the state leaders of developed countries, in particular, touch the consciences and, with the entire citizens of the world, realize the significance of rebuilding standards and sublimity of the past to build a more civilized and glorious world.”

Quoting from Fethullah Gulen, the Sultan said, “Today, as Fethullah Gulen spiritually sensed it, the world is ‘living the days in its womb’. As this honorable Turkish scholar said, the Muslim world has gone through a period of depression affecting its faith, morality, thoughts, education, traditions, industry, politics and social life. The Muslim ummah (community), once, achieved the best administrative system of the history that no one could imagine until recently. The very same ummah held on belief tightly, strove to reach the perfection in morality and still advanced in culture. Muslims deserve to rule over the world on condition that they practice their religion faultlessly, achieve moral perfection, lead ahead of the age and interpret incidents through the trio of inspiration- reason-experience. Three principles were behind that golden age: Inspiration, reason and experience. It is a pity that the same world was immediately overwhelmed by darkness when it moved away from its dynamics and became a slave to ignorance, immorality, superstitions, and bodily desires. It scattered around like a tasbih (prayer beads) with a broken string. However, this period of depression didn’t last long despite the efforts of internal and external robbers. Today, Muslims are fighting for a resurrection almost everywhere. Muslims have breathed this hadith for years: “The truth always wins and cannot be defeated.” And we lived with the verse: “The good end is for the righteous”. We hope, in the very near future, the content of the surah Nasr will come alive with its magnificence. That’s right. The 19th century might have been a European age and 20th century might be American but 21th century will be the age of Asia.

Quoting the hadith “Seek knowledge even it is as far as China”, Buwono said, “This hadith is now reinterpreted among the Indonesian youth as “Let’s go to Turkey to study and to read the Qur’an.” In this regard, Turkey and Indonesia will be the dynamics mobilizing an Asian Renascence and do their best to reposition the center of the global civilization in Asia.”

“The Aceh flag is inspired by Turkish crescent-star”

The Indonesian sultan highlighted that the Aceh flag is inspired by Turkish crescent-star and further revealed that a flag presented by an Ottoman Emperor is still available at Yogyakarta Palace. “Turkey-Aceh ties date back to mid-19th century when Aceh was under the Dutch colony. Turkey couldn’t send help as it was fighting Europe. But it restarted its helps sending humanitarian aid following the tsunami disaster in 2005. The Turks founded Fatih Schools in Aceh and are providing scholarships for undergraduate, master and doctoral studies” said Buwono. Concluding his speech, the sultan promised that he will do his best to strengthen the friendship between the two countries and thanked Meliksah University for granting the degree.

Finally, the board member of Meliksah University and Kayseri Chamber of Industry Chairman Nurettin Okandan presented a plaque of the university to the sultan.

Source: [in Turkish] on Haberler.com, April 10, 2013. English translation is retrieved from HizmetMovement.Com