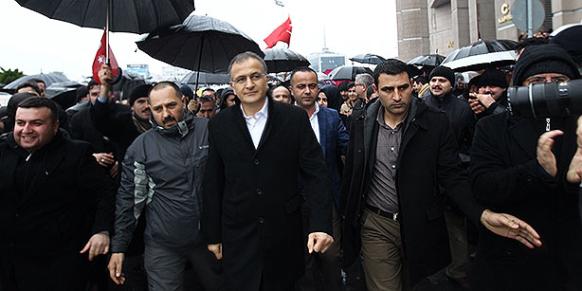 One says that being behind bars is no different from living under a regime that has morphed from a nascent reforming democracy into a leading jailer of journalists. After being informed of an impending police crackdown on many journalists at the Zaman and Today’s Zaman dailies; Aksiyon magazine; Irmak TV network; and Cihan news agency — all part of the Feza Media Group — there was no a sign of trepidation or fear.

“It is 2014 … and we are waiting for a police operation with our colleagues,” Sevgi Akarçeşme, a Zaman daily columnist and Today’s Zaman correspondent, said in a widely-shared tweet that has become the epitome of defiance. While journalists refused to bow to increasingly sharpening government pressure inside their newsroom, hundreds of readers thronged to the newspaper’s headquarters in İstanbul’s Yenibosna neighborhood, despite the rain.

“Zaman cannot be silenced,” the cheering crowd chanted, interrupting the speech of editor-in-chief of Zaman, which has gone through thin and thick over the past year to survive a nationwide crackdown by the country’s bellicose President Recep Tayyip Erdoğan. The president publicly lambasted the newspaper, called on his supporters to boycott the daily and reportedly made life difficult for those businesses subscribed to the paper.
Erdoğan has not shied away from expressing his deep-seated hatred for the Gülen movement, whose followers helped bring the newspaper into the country’s number one spot in terms of circulation. One-fifth of Turkey’s five million daily newspaper readers peruse Zaman.

“As a citizen who attaches great importance to the country’s democratization, increased transparency and accountability of the system, and who works for this to happen … I hereby declare that I will never cast my vote for the [AK Party] due to its insistence on passing a match-fixing law,” Bülent Keneş, editor-in-chief of Today’s Zaman, who has been slapped with several criminal complaints by Erdoğan in the past year, wrote back in 2011. He is regarded as one of the bravest voices in Turkish media, with his readers commending his journalistic courage and firm stance in the face of a relentless crackdown. With journalistic activity ranging from New York to İstanbul, Keneş is among the list of journalists whistleblower Fuat Avni claimed would be detained on Friday.

Angry with the way Today’s Zaman covered the Gezi protests, rumor has it that Erdoğan ordered several pro-government newspapers to establish an English-language media outlet so that they could become his mouthpiece to the wider world. The Star daily, which failed to establish one, passed the responsibility on to the Sabah newspaper. “Essentially composed of thinly veiled government press releases,” a recent article at the Foreign Policy said, “Daily Sabah is actually quite useful as an English-language window into the AKP’s thinking — a slicker version of what so many Turks read every day.”

The government’s obsession with Keneş dates back to before even Erdoğan openly started to lash out at the newspaper and the Gülen movement. They blamed him for running a newspaper that “complains about Turkey to the world,” accusing him and the daily of “treason.”
The government deported this very reporter in February for tweeting about an embarrassing corruption scandal — in English.

Other followers of the Gülen movement were not as critical as Keneş in speaking out against the government until last year’s Gezi Park protests. As Erdoğan’s misguided policies unfolded, the newspapers grew more critical. Then the corruption scandal blew in like a deadly wind. Erdoğan’s entire corruption ring was out in the open. In attempting to cover up the embarrassment, he has become too radical in making swift amendments so that he can silence critics.
A great orator, mostly for his own predominantly rural base, Erdoğan could easily spin the corruption story in his favor. He described the corruption investigation as a ruse by what he calls a “parallel state” within the judiciary trying to topple his democratically elected government — the gravest sin in Turkey’s political life, which has witnessed several devastating military takeovers.

Since the corruption charges against government ministers and pro-government businessmen were dropped, Erdoğan’s government has started to go after those who reported on these claims. Keneş was one of the first editors who defied a government-imposed media blackout on a parliamentary commission tasked with investigating four ministers incriminated in the graft scandal. “I am honored to announce that Today’s Zaman won’t comply with this gag order,” Keneş tweeted back then when Ankara ordered the corruption censorship.

“We will not bow. We will not be silent. They will not be able to silence us,” Akarçeşme said on Friday, confident that their journalistic activity is devoid of criminal activity. She continued tweeting to her tens of thousands of followers on Twitter throughout the night, sometimes making jokes, not acting like someone waiting on an imminent arrest.

As the hours ticked by toward midnight, the whistleblower announced his satisfaction at having upset the government’s plans for mass arrests. He said that those who were supposed to supervise the operation had been sent home and that a final decision has not yet been made. Many speculated early on Friday that exposing the government’s plan may have averted a possible tragedy.

Even the soft-spoken Abdülhamit Bilici, chief of the Cihan news agency, rebelled against attempts to bury the country’s already dwindling outspoken voices. “This newspaper,” Bilici said, referring to Zaman, for which he is a columnist, “has been backing a struggle for democracy in Turkey since 1987.” He said the newspaper has a 30-year history of standing by the oppressed. “This history can never be destroyed,” Bilici highlighted, as he stood under the rain to address loyal readers standing on a vigil outside the newspaper.

Whatever happens on Friday, one thing won’t change: Turkey’s media environment is dangerous, but it has also become an ecole to produce brave journalists. Like those waiting to be handcuffed at Zaman.