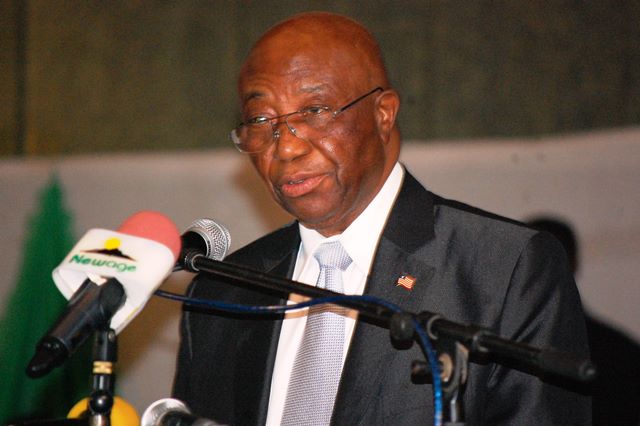 Speaking at the groundbreaking ceremony of the Turkish-Liberian Light International School’s new campus in Margibi County, VP Boakai said that the country is moving forward and the Turkish school wants to be a part of it.

VP Boakai continued that the Turkish school has brought quality to education by demonstrating what children are suppose to have especially in learning different languages and cultures. He then called on the students of the Light school to pick-up on the culture aspect of education.

The Liberian VP then lauded the citizens of Margibi who give the land for the new campus to be built, and prayed that more schools be built in the area.

The Vice Principal of the Turkish-Liberian Light International School, Linda Dean during the program said that since the school began in 2006 the dream of reaching thus far wherein a campus is being erected.

The school’s vice principal said that the school’s mission is to prepare our students for leadership roles and provide them with the opportunity to be successful in our rapidly changing global environment. We believe that all students should become responsible citizens, productive employees, resourceful employers and effective community members.

She concluded that the vision of Light International School is to provide a learning environment and experience that emphasizes global understanding, community involvement, individual responsibility, and high academic standard through the study of science- oriented programs and cutting edge teaching methods. It is our intention to address the importance of the individual as an active member of a community that extends beyond the classroom into a more diverse society.

For his part the General Manger of the school, Ramazan Burak said that the government of Turkey along with its Liberian counterpart will continue to foster a bolstering relationship.

He then acknowledged to the people, government, parents, and students that the school is there’s for their children to receive a good education.

A hospital is set to be established jointly by the Marmara Health Federation (MASFED) and Turkish charity Kimse Yok Mu (Is Anybody There) in the African country of Ethiopia, where the average life expectancy in only 40 years. The 40-bed hospital is expected to open on Aug. 1. A total of 50 medical health-care personnel […]

Turkey’s Deputy Prime Minister Bekir Bozdag paid a visit to the local Turkish school, during his official visits in Moldova. A Moldovan students performed a Turkish song in Bozdag’s honor. “The Turkish schools –be it in Moldova or elsewhere in Europe, Africa, Asia, Middle East or Balkans- have been Turkey’s source of pride. They have […]