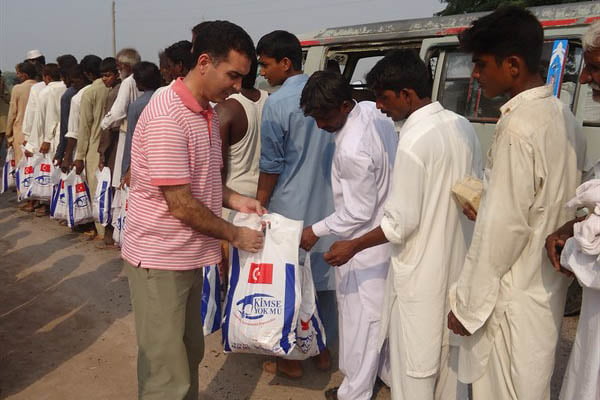 KYM has been consistently providing assistance for the town accommodating 300 families. Its volunteers handed eid meat to the residents going door to door.Previously flood victims joined by the KYM Pakistan volunteers enjoyed the eid. The eid prayer in the morning kicked off the day and was followed by the locals’ happy eid wishes. Then it was time for slaughtering the sacrifice animals. Their meat was packed in 5 kg-bags to be distributed to all the locals.It was easy to tell the joy the town children had from their eyes when the volunteers handed them eid candies. A young one expressed his happiness by singing a song.“We’ve been spending our eid with our flood victim brothers. We’ve been standing with them for all this time and will always be. It’s because they’re hopeful of us and we can’t remain indifferent,” KYM’s director to Pakistan Ozcan Inan said.KYM provided eid meat for the needy across the country including the cities Karachi, Lahore and Islamabad, reaching out to 75 thousand Pakistanis. Five hundred volunteers were involved in slaughtering three thousand animals in total at 15 different locations and distributing their meat to 15 thousand needy families. The donations were received with prayers for the giving Turkish people.Published [in Turkish] on Haber3, 8 October 2014, Thursday

The Journalists and Writers Foundation’s (GYV) Academic Thought Platform (ADP) came up with a remarkable program amid the ongoing heated debate over the use of the state authority and the relationship between the state and the civil society in our country.