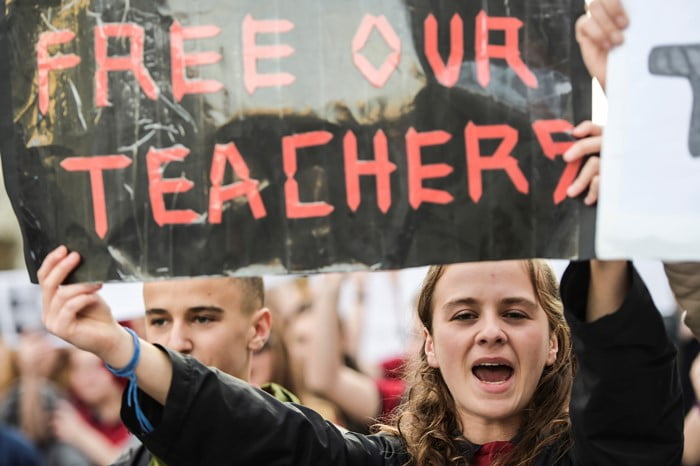 Turkey alleges that all six are members of a criminal network made up of followers of the exiled Islamist preacher Fethullah Gülen, the man accused of plotting the failed coup attempt in July 2016.

“Turkey, which was supposed to help Kosovo to construct the rule of law in that country in this difficult phase, is playing a destructive role,” Schenkkan told AhvalTV. “They are subverting Kosovo’s intel agency and interior agency to get cooperation to pull an illegal operation.”

Schenkkan, an occasional contributor to Ahval and frequent commentator on developments in Turkey, said the abduction of six Turkish citizens had led to a big falling out in Kosovo between the prime minister Ramush Haradinaj, who maintains that the operation was carried out without his permission, andPresident Hashim Thaçi, who praised it.

Haradinaj tweeted that he would take action appropriate to his office shortly after news of the operation emerged, and promptly fired the Kosovan interior minister and intelligence chief.

Doğa Ulaş Eralp, a scholar-practitioner of international conflict resolution,discussed the historic background of the Justice and Development Party (AKP) government’s presence in the Balkans with AhvalTV.

Eralp said that since the AKP government had come to power in the early 2000’s it had depended on Gulenist networks in Balkans to further Turkish interests.

These business interests in Kosovo hit a value of $2 billion, and with many crucial investments coming from Turkish businessmen, Turkey’s AKP government is a significant player for the Kosovan government. However, Eralp added, “Turkish support comes with a cost.”

Eralp said prime minister Haradinaj, who opposed the Turkish government operation, is an Albanian nationalist and “almost an anti-Ottoman interventionist.”

President Hashim Thaçi, on the other hand, is known both for the “ardent” support shown to him by Turkish President Recep Tayyip Erdoğan, and for the allegations of a dark past with links to organised crime since the Kosovan war.

When it comes to the state of Kosovo, Schenkkan says it is “a very unusual, very young state, which became independent in 2008 only following the NATO intervention of 1999, a final breakaway of the former Yugoslavia.” In other words, Kosovo was created from the “ashes of the war, ashes of Yugoslavia.”

“The structure of the Kosovan state has a lot of international involvement. Kosovo is a kind of a hybrid state,” said Schenkkan. “EU and Western oversight is interjected into the state,” he added, particularly due to the presence of international judges at the country’s constitutional court, and diplomatic pressure from the United Kingdom, France, the United States and EU diplomatic influence.

Yet there is still a “big divide” within Kosovo, between what and how Kosovan politicians see things and international expectations, said Schenkkan. One of the biggest issues within Kosovo currently is the conflict between this international oversight or intervention and nationalism, with the main opposition party maintaining a strong anti-internationalist stance.

The arrests were greeted with fanfare by the press in Turkey, where there is widespread agreement that Gülenists have been complicit in misdeeds stretching far back before the 2016 coup attempt. As such, some would argue that Erdoğan had the rıght to snatch the six in Kosovo.

“Erdoğan has every right to pursue his perceived enemies within his sovereign country,” said Eralp. “However, (the six abductees) were residents in Kosovo. They were there for more than 10 years. They were under the legal protection of the independent state of Kosovo.”

Turkey, as the second state to recognize of the independence of Kosovo, had an obligation to support the sovereignty and integrity of Kosovo and respect the country, according to the scholar. Yet by abducting the six, continued Eralp, Erdoğan had breached two basic principles of international law. “The Prime Minister of Kosovo said they were not consulted about this operation which makes it illegal. Act itself is a violation of international law.”

With this operation, according to Eralp, the Turkish president has put Turkey in a difficult place vis-a-vis Turkey’s influence as a third-party intermediary between Serbia and Kosovo, and harmed its standing internationally, despite the domestic benefits.

Moreover, the Kosovan action, Schenkkan noted, constituted a breach of major international agreements signed by Turkey and Kosovo. It was also a blow to the high hopes held by the EU and United States that Turkey could play a positive rule in consolidating the rule of law in a young Balkan state that had emerged from a bloody conflict, said Schenkkan.

Dr. Eralp noted that Turkey has been preaching for support of democracy in the international arena, but “this no longer fits into Turkey’s agenda of action.”

Eralp also commented on Turkey’s new “diaspora affairs” department, which was recently created under the Turkish prime ministry. According to Eralp, this new department is instrumentalising the diaspora as “quasi-intelligence gathering networks in the Western Balkans and elsewhere.”

Eralp expects further repetition of such acts such as kidnapping or snatching not only in Balkans but perhaps also in Western countries.

Eralp called on EU leaders to re-evaluate their policy of appeasement. “EU leaders in the recent Varna summit decided to give yet another pass to Turkish leader as long as he is vocally committed Turkey’s future in Europe,” said Eralp. “Yet the actions of the Turkish government in areas that matter for future European integration does not fit the narrative he adopted in Varna.”

It is heartbreaking that a concert, a joyful event meant to bring people together to enjoy music and friendship, so quickly devolved into a scene of violence, chaos and terror. Any attack on the sanctity of human life is an attack against humanity. I will continue to denounce without hesitation any use of violence to promote an agenda – whether religious, political or ideological.

The Turkish government detained more than 70 women on Wednesday evening in five provinces across Turkey as part of a investigation targeting alleged members of the Gülen movement. It was claimed that the detained women have been helping financially to the relatives of those who were jailed or escaped from the persecution of the Turkish government.