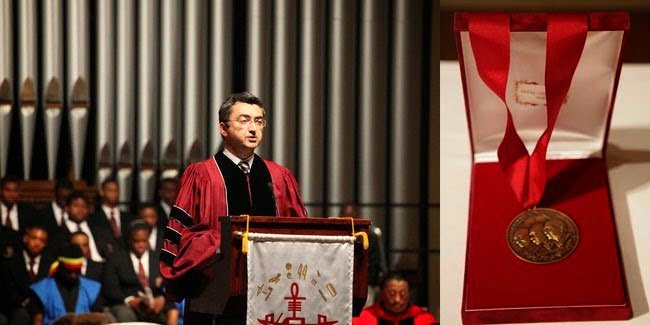 Several pro-government dailies have run stories with far-fetched allegations that a prestigious peace award was presented to Turkish Islamic scholar Fethullah Gülen thanks to the sponsorship of a “parallel” — a defamatory term invented by the ruling party to describe Gülen and his sympathizers — foundation, even though the organization was founded in Japan.

In an attempt to slur the prestigious 2015 Gandhi King Ikeda Peace Award presented to Gülen for promoting ideas shared by the world’s leading peace and civil rights activists, the pro-government dailies Sabah, Star and Yeni Akit claimed last week that the “parallel” Ikeda foundation sponsored the ceremony held by the Martin Luther King Jr. International Chapel at Morehouse College, which gave the award to Gülen.

In previous years, the award has gone to prominent historical figures such as Nobel laureates Nelson Mandela, Desmond Tutu and Mikhail Gorbachev.
Responding to the allegations of the dailies controlled by the government, Lawrence E. Carter — the dean of the Martin Luther King Jr. International Chapel — said that Turkish people cannot be fooled by such allegations. “I don’t pay attention to those allegations because there is no truth whatsoever in those newspaper reports,” Carter said.

Alp Aslandoğan, the president of the Alliance for Shared Values — an umbrella body for US-based organizations affiliated with the Gülen movement – who accepted the award on behalf of Gülen, said that if those who run stories against the Ikeda foundation in pro-government dailies were to search online, they would have learnt the truth about the foundation.

Scott Alexander from Chicago’s Catholic Theological Union, who was the keynote speaker at the ceremony, lashed out at the dailies’ reports, saying that it is “offensive and insulting” to claim that an award presented by a center founded in honor of Martin Luther King was “paid for.”

Saying that he had personally witnessed the flourishing of the Gülen movement’s activities over a short period in the US, Alexander said: “The main factor is not money [for members of the Gülen movement] here [in the US]. The success of Hizmet is down to sincerity, dedication and a strong ethical duty.”

The Gülen movement has spread to more than 160 countries around the world and has a vast network of schools, charity organizations, health institutions and cultural dialogue centers. The volunteers of the movement often have to confront dire conditions in the countries they serve, ranging from Ebola-stricken nations in Africa to conflict-ridden countries in the Middle East.

A democratic society should allow everyone to live at their will. Democracy is the system that probably does this best.