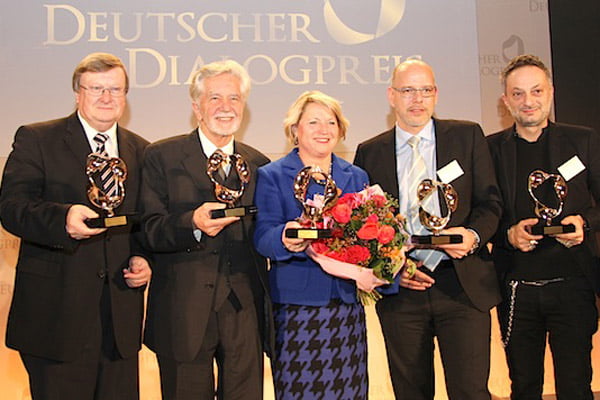 Comprised of 14 Germany-based dialogue institutions inspired by Fethullah Gulen’s teachings, BDDI blazed a trail in Germany by honoring individuals and institutions who have contributed to dialogue.

Cebrail Terlemez, president of Intercultural Dialogue Forum (Forum für interkulturellen Dialog BDDI), said, “Our Honorary President Fethullah Gulen holds that global peace is only possible when diversity among people is recognized as a valuable aspect of humanity and cherished. We’ve founded BDDI as an umbrella for 14 institutions inspired by Gulen’s understanding of dialogue. We as BDDI take on responsibility for today and tomorrows by acting socially responsible in our projects. Our engagement is referred to as “Hizmet” in Turkish.”

German Undersecretary at the Foreign Office, Cornelia Pieper, was bestowed Politics Award for her efforts towards Christians, Muslims and other faith members. As undersecretary, Pieper earlier attended iftar dinners with diverse faith members and exemplified Germany’s global vision and tolerance, through her initiatives.

“People trust Germany, which, I believe, is a result of our contribution to intercultural dialogue. Culture means to extend bridges between peoples. It is to be tolerant and to recognize faiths. These are crucial to building bridges and eliminating biases,” Pieper remarked. She additionally put an accent on welcoming people of opposing views.

“We should stand side by side rather than opposing each other. Where someone is from or who s/he is doesn’t matter, but to get to know each other does,” Life’s Work Award honoree, Meinhard Tenne, 90, said.

Karl Josef Kuschel, professor of intercultural and interfaith dialogue at Tubingen University, who defines dialogue as a life style, expressed his enthusiasm for exploring “the different.” “Abraham is an honor to me. The three religions find the common ground around Abraham and share his hospitality still alive. The three religion’s members need to get to know each other. We cannot fully comprehend a religion without knowing the Qur’an, Bible and Torah. It is important for Muslims to center on dialogue as it exists by nature in Islam,” Kuschel added.

The author and painter Feridun Zaimoglu, the recipient of Literature Award, who moved in Germany at the age of four, identified himself as a German author, in his address. He is currently living in Kiel, where he first discovered his enthusiasm for literature and arts.

The founder of Intercultural Council, Dr. Jurgen Micksch received the Social Engagement Award on behalf of the institution which is highly acclaimed for its intercultural efforts.

“We aim to foster intercultural dialogue in an effort to enhance coexistence in society by holding conferences, seminars and roundtables,” Micksch said.

The umbrella organization maintains “Germany is changing and home to peoples of diverse ethnicities, cultures and faiths. And this diversity offers a unique opportunity to live in peace.” BDDI also hit the social media with its awards ceremony. The event went viral via the hashtag #ddp2013 and earned a place among trending topics.

Excerpted from the article published [in Turkish] on Zaman Germany, November 22, 2013.

The engagement and integration to the larger society is very crucial for Muslims. There are many good qualities in secular societies which are Islamic such as right of education, freedom and housing. We should value them and play our part.