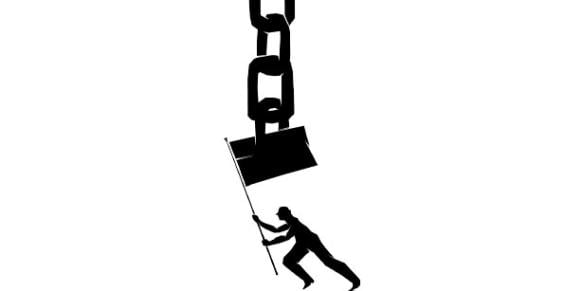 Can the stance adopted by the Gülen movement in the face of the government’s attempts to discredit it and ultimately wipe it out be described within the framework of “civil disobedience”?

My first response to this question is to question whether or not we are really obliged to use the concept of civil disobedience, one created by the West, when we are talking about the Muslim world, which is after all so very different. Does analyzing a civil and social movement which receives the support of so many factions of society — and which places great importance on religious values — using the concept of civil disobedience really make sense?

The truth, though, is that the above questions are material for a whole different column, so let us push them aside for the moment and take a look at the brief history of civil disobedience as a whole.

One description of the Western concept of civil disobedience could be put as such: “A peaceful, non-violent form of protest, with a moral motivation behind it, aimed at unfair or unjust laws, or changing governmental policies. While not technically legal, this form of protest can be individual as well as social.”

So, taking this description as a basis, let us move on to the answer regarding the Gülen movement and civil disobedience. The stance adopted by the Gülen group in the face of government policies aimed at eliminating it fits with my above-provided description of what civil disobedience is, with the exception of the “illegal protest” part. When we observe various protests that remain vivid in our minds — protests for freedom of the press in front of the İstanbul Courthouse and in front of the Zaman and Samanyolu TV buildings, as well as various others both at home and abroad — we note that none of these were an “illegal protest,” nor did any of these cause any public order problems. In contrast, these protests lent support to the police to implement their duties.

Civil disobedience is generally the quest for personal rights, though it is a version of this quest that is stuck in a rather narrow definition. The people engaged in this quest are generally those who have already been victimized or oppressed by unjust practices. What makes the Gülen movement’s quest for its rights different in this sense is that it refuses to make concessions as to its life philosophies, its lifestyles and its worldly as well as spiritual responsibilities, even as it engages in this struggle for its rights.

When one examines examples of civil disobedience, one is confronted by the reality that civil disobedience can often turn into uprisings on a widespread level. Truly illegal actions — like refusing to go to the military or not paying taxes — can often wind up in uprisings. Which is why some academics likely distinguish acts of civil disobedience that contain absolutely no elements of illegality as “passive resistance.” Some opine that there is no difference between civil disobedience and passive resistance. My personal belief is that these are important distinctions in that they underscore whether or not the protest has or has not remained within the law and the justice system, and that, as such, they ought to be labeled separately. In this sense, while accepting that there is no strong and clear line in the end between these types of protest, I believe that the Gülen movement’s reactions in the face of the government’s policies against it can be more appropriately described as passive resistance and not civil disobedience.

CSOs a way of ordering relations between state and society

Civil society organizations have emerged largely in modern times and in the Western world as a way of ordering the relations between the state and society, while also providing a sort of buffer zone between the two.

The reason that appears to have triggered the emergence of so many civil society organizations throughout history is various tyrannical acts on the part of the state. As states have trampled on rights and freedoms, universal human rights and the supremacy of justice — all while wielding the powers and tools provided by the state — it has been impossible for people to battle for their rights on an individual level. But unlike what most think, these civil society movements are not competing against the state, the government or bureaucratic organizations. In fact, quite to the contrary, the activities of these civil society organizations wind up causing governmental and state departments to function more smoothly. And in fact, the civil disobedience/passive resistance protests mentioned above could even be perceived as being a supervisory check on government and state functions.

Or, to put it another way, just as the powers held by the justice, legislative and executive branches in smoothly functioning democracies provide the necessary checks and balances to the system, in the same way, civil societies wind up providing a peaceful system of checks and balances in the face of unjust policies and actions.

From this angle then, the state and government must try to lift any barriers impeding the development of civil society organizations, even if they are the root of some criticism for said state and government. Civil disobedience is what emerges when this is not done, and when every bit of criticism is labeled by the state as a coup attempt — which is precisely how one can view not only the Gezi uprisings but also the reactions in the wake of the Dec. 17, 2013 investigations. If the state persists in this stance, there will doubtless be a long string of more Gezis and similar situations.

So these days can we talk reasonably about a real return to democratic promises, universal values, the promise of basic rights and freedoms and the supremacy of justice in Turkey? I am afraid not, at this point. As we can see, the chasm between theory and practice deepens every day.

We must not forget that even when people cast their votes for a ruling party, they are not obliged to approve of every move made by said party.

In democracies, political parties do not provide the sole form of opposition against a ruling party. Aside from political opposition, people can make their opposition and criticism known either individually or via civil society organizations. It is not only the right but in fact the duty of people to do so, as long as the expression of said opposition or criticism does not rely upon violence. When violence is not a factor in acts of opposition, this opposition falls into the category of freedom of thought, which is of course one of the two main principles of true democracy. Freedom of the press falls into the category of freedom of thought as well, as the press is in fact an organization created to supervise and control in the name of the people. In this sense, freedom of the press is actually freedom of the people.

To finish, though, the Turkish state possesses a political culture seen by many as sacred. In fact, the saying “May God not doom the state” is a product of this way of thinking. In addition, Turkey is a country where there are constant attempts to take over the state using ideological stances. This is a reality that no one can deny; it is a reality that has taken us hostage through the history of our republic and a reality that has provided a radical foundation for not only our style of politics but also our understanding of what constitutes opposition. The most painful result of this has been the polarization and divisions we see among our people. Unfortunately, the rhetoric used by leaders does nothing to dissipate this situation; partisan stances carry the country as a whole only further down this road.

Turkey has witnessed this all many times in the past; it is reliving a film it has watched so many times already.

In short, civil disobedience — or more pointedly, as I have noted, passive resistance — is something very different from uprisings, revolutions or provocations and mischief making. Passive resistance is ultimately a peaceful form of protest which brings together people of differing world views and leanings, united in their legal and moral devotion to revising mistakes they see unfolding.

*Dr. Ahmet Kurucan is a theologian.

9 March 2012 / TODAY’S ZAMAN, İSTANBUL As this year’s Abant Platform tackles the pressing issue of shaping Turkey’s new constitution, a wide spectrum of intellectuals, lawyers, political leaders and journalists are discussing the problematic areas of, and proposing solutions to, the constitutional drafting process. “Deliberations should continue with the spirit of respecting each other’s […]