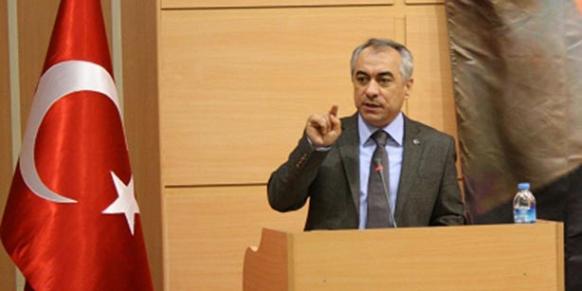 “Parallel structure” is a term created by President Recep Tayyip Erdoğan to refer to sympathizers of the faith-based Gülen movement in the state bureaucracy.

According to the story in the Habertürk daily, Ersoy called the person in charge of the restaurants in Parliament after he saw “samanyolu kebap” on a menu, ordering that it be removed. Samanyolu is the name of a TV station and educational institutions that were established by people inspired by the views of prominent Turkish Islamic scholar Fethullah Gülen.

Since Ersoy ordered the removal of the dish, it has not been served. When Habertürk asked Ersoy about the incident he questioned how they had come to know about it as he had only talked to the person in Parliament that it concerned.

Previously, “kandil kebabı,” another dish in the restaurants of Parliament was also the subject of a similar debate when the government started talks with the outlawed Kurdistan Workers’ Party (PKK) as part of a process to solve the Kurdish problem. Kandil is the name of a mountain range in northern Iraq where PKK top brass and militants are based. However, the dish was not removed from the menu.

Since a major graft and corruption investigation went public on Dec. 17, 2013 implicating then-ministers, politicians and businessmen from the ruling AK Party government and people from Erdoğan’s inner circles, President Erdoğan started a smear campaign against the Gülen movement, also known as the Hizmet movement, which consists of institutions inspired by the views of Gülen and particularly Gülen sympathizers in the state bureaucracy.

As part of the government’s hatred of the Gülen movement, the Interior Ministry recently changed the emblem of the National Police Department on police vehicles because it contained the word “Hizmet” (service in English) in its motto, reading “Halk için Emniyet, Adalet için Hizmet” (Security for people, service for justice).

Since Dec. 17, 2013, municipalities have unlawfully removed billboards and other signs of institutions close to the Gülen movement as well as their advertisements along the roads in İstanbul and Ankara where President Erdoğan may travel.

In May of last year, then-Prime Minister Erdoğan publicly asked his AK Party supporters not to send their children to schools close to the Hizmet movement. “We will not even give them [members of the Gülen movement] water,” he vowed. Erdoğan had also ordered officials at municipalities run by the AK Party to use any means to seize land and buildings belonging to Hizmet institutions.

Prime minister Recep Tayyip Erdoğan, who has recently accused the faith-based Hizmet movement inspired by Turkish Islamic scholar Fethullah Gülen of cooperating with coup perpetrators during the Feb. 28, 1997 post-modern coup era, defended the same movement at a parliamentary coup commission in 2012, when he said the movement’s followers had been victimized during the coup.