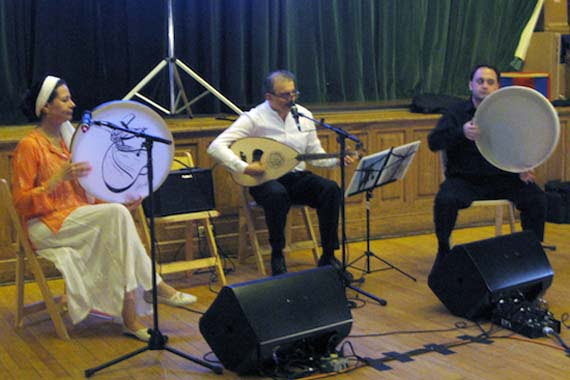 Musicians from the Turkish Cultural Center serenaded guests upon their arrival, and performed at various points during the Iftar. Photo by Francesca Norsen Tate

Brooklyn’s Jewish and Muslim communities have used a common fasting day to build stronger bonds between them.

Last Tuesday, July 16, Jews observed Tisha B’Av, the saddest day of the Hebrew calendar which commemorates the destruction of the First and Second Temples and is a strict fast day. Meanwhile, until Aug. 7, Muslims are observing the holy month of Ramadan, during which they believe the prophet Mohammed received revelations from God, which are recorded in the Qu’ran. Both fasts end at sundown, and the timing inspired Congregation Beth Elohim in Park Slope, the Turkish Cultural Center and the Kings Bay YMHA to hold a joint break-the-fast meal. Muslims call this meal the Iftar, and hospitality is a central part of this tradition.

The large Reform temple in Park Slope had already enjoyed an ongoing friendship with the Kings Bay Y and is starting a new relationship with the Turkish Cultural Center. Helping bring them together was the Peace Islands Institute, a non-profit organization that is experienced in this very work.

“Basically, we form dialogue groups and understanding between religious groups,” Ibrahim Sayar told the Brooklyn Eagle during the Iftar. Mr. Sayar is the director of the Peace Island Institute’s Center for Interfaith Affairs. They have worked with Congregation Beth Elohim in recent years. “This kind of event is not new,” Sayar explains. “They had a similar program with the Jewish Theological Seminary, for example. We have different programs with different communities: different churches, different churches and different temples—and even Buddhist groups, not only Jewish people.” Working in seven U.S. states, including New York, Sayar knows from experience that “it really helps to bring people together, give them first-hand experience of the other. Because the information that we are receiving about the other culture is usually from second-hand or third-hand: through media or the books that we know. And the media can be sometimes deceiving.

Fasting is a shared practice, and is common to several religious traditions. “I think Ramadan is one of those occasions when we can share this kind of experience,” said Sayar. “Particularly today, since the Jewish community and Muslim community are fasting at the same time. And breaking fast at the same table means a lot.”

He added, “As people communicate, experience each other; they continue the relationship throughout the year.

Rabbi Marc Katz, Assistant Rabbi at Congregation Beth Elohim, points out that the Kings Bay Y and the Turkish Cultural Center both “have a wonderful and storied history. We’re so glad that within their relationship that they’ve been building, they’ve brought our community in as well. From our previous years of engagement with the Kings Bay Y, and our new engagement with the Turkish Cultural Center, we’re so happy to be building these bridges, and especially to be forming these relationships.”

Leonard Petlakh, executive director of the Kings Bay Y, said of Congregation Berth Elohim, “We couldn’t think of a better place to bring these two communities—the Jewish community and the Muslim Turkish community—together in this special place. So my brother Suleyman [Aydogan] brought up the idea of having the Iftar dinner at a synagogue—and then he had a follow-up idea—he’s absolutely responsible for the fact that we are here in this wonderful place of worship. It’s beyond a place of worship: it’s a cultural center, it’s a real spiritual center for the community of Park Slope.” Mr. Petlakh also saluted CBE’s Senior Rabbi Andy Bachman, who was in Israel at the time of the event.

“I have witnessed first-hand the great work that the Turkish Cultural Center does all over the world,” said Mr. Petlakh. We have traveled together to Turkey, and Israel and other places. I’ve been amazed at the dedication and commitment that the people at the TCC bring into their work.”

Zafer Akin, president of Peace Islands Institute, said, “The Turkish community and Jewish community—we have so much in common: Devotion to our families, our mosques, synagogues, and dedication to peace. The idea behind tonight’s event is to show that we both have our own values, our own culture, our own backgrounds, and yet we can still come together: not just in an atmosphere of friendship, but as a family.”

Zeki Saritoprak is the Nursi Chair in Islamic Studies at John Carroll University and delivered an Interfaith Lecture on Gülen and his Hizmet movement. Saritoprak also gave a brief outline of Turkish history, from the start of the Ottoman Empire to the founding of the Republic of Turkey. “Muslims have to establish … not religious […]