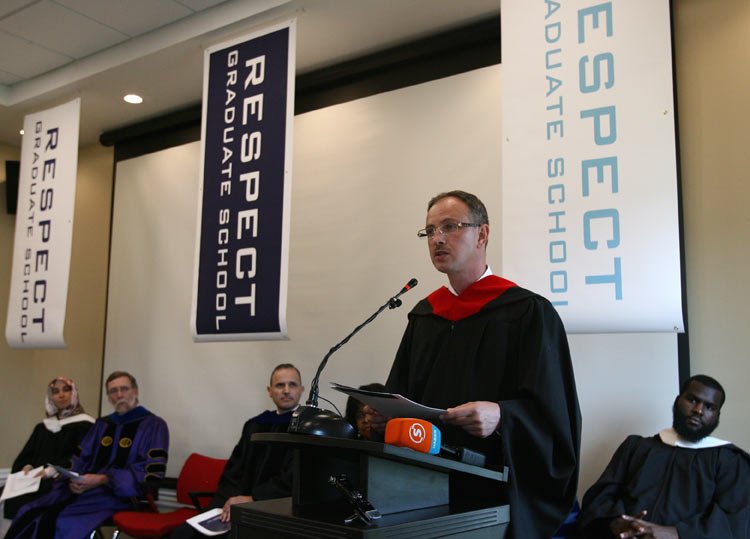 The first university to be founded by Muslims to teach Islamic studies in the United States East Coast area has started its new academic year, promising to be a leading institution in educating future scholars, including imams.

The opening ceremony of Respect Graduate School (RGS), which is to offer a graduate program leading to the degree Master of Arts in Islamic Studies (MAIS), was attended by the representatives of different faiths from across the country. The graduate school is located in Bethlehem, Pennsylvania.

The ceremony kicked off with Najeeb Johnson, a student at the university, reciting the first chapter of the Qur’an, the Fatiha. Islamic professor Suat Yıldırım was also among the guests.

Patricia Robinson from the Lutheran Theological Seminary at Philadelphia said at the ceremony that the presence of visionary leaders in these types of projects is important and that they will carry out collaborative efforts to give the hope that the world needs.

Ryan Mackenzie, one of Pennsylvania’s legislators, said he was honored to participate in the opening ceremony of an institution that would educate future leaders. Reminding the gathering of the spread of extremist ideology in the world, Mackenzie mentioned a recent op-ed by Turkish Islamic scholar Fethullah Gülen, who urged Muslims around the world to promote education as an antidote to extremism.

President of the university, Süleyman Eriş, said the opening of the institution marked the first time that Muslims had established a university in the US, adding that most of the school’s administration is composed of Muslims. He said there are many universities that teach Islam, but almost all of them are controlled by non-Muslims. Eriş said the name of the university was chosen by Gülen.

Christians, Jews and Muslims came together to discuss the significance of pluralism and coexistence at Abrahamic Dinner by Niagara Foundation in Chicago. The annual held dinner took place at the newly-launched building of TASC (Turkish American Society of Chicago). Niagara Foundation President Serif Soydan delivered the opening speech of the night and left the stage to the […]