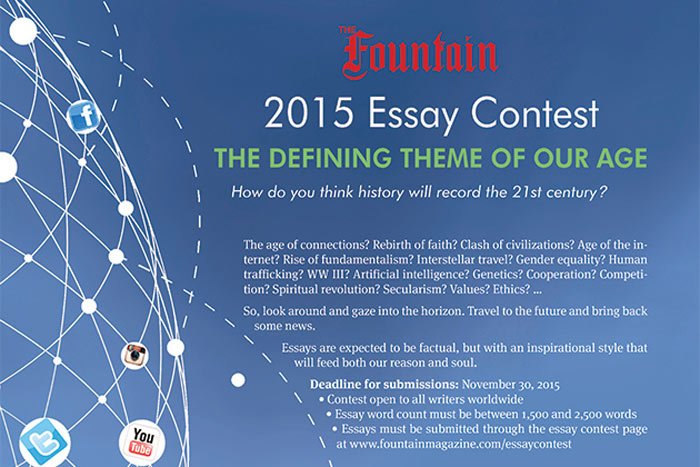 THE DEFINING THEME OF OUR AGE
How do you think history will record the 21st century?

Throughout human history, different periods have been captured by a defining theme: the Dark Ages… the Industrial Age… the Nuclear Age… the Information Age… the Space Age, etc.

What do you think the theme of the 21st century will be?

You may include as many topics as you think are relevant; the possibilities seem endless.

One may feel it is too early to determine the theme of what is still a new century. Yet, we believe it can prove useful to project the future and to be prepared for the coming days. Maybe, with enough preparation, it’s even possible to change the course of history before it’s too late!

So, look around and gaze into the horizon. Travel to the future and bring back some news.

Essays are expected to be factual, but with an inspirational style that will feed both our reason and soul.

• Contest open to all writers worldwide
• Essay word count must be between 1,500 and 2,500 words
• Essays must be submitted through the essay contest page at www.fountainmagazine.com/essaycontest

Erdogan may continue to demonize and even to try to criminalize the Hizmet movement in an effort to brainwash his people into believing that he is the only one who can save the nation. We will see if this brings him the additional votes he needs to be elected president.