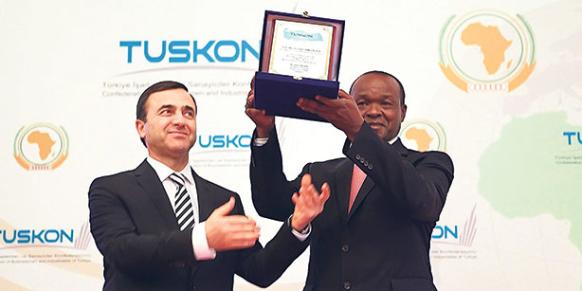 TUSKON has been promoting the improvement of Turkey’s trade ties with Africa since 2005, which the government designated as the Year of Africa.(Photo: Today's Zaman, Kürsat Bayhan)

As a part of a prolonged campaign of intimidation against opposition figures and institutions, the government has been engaging in oppression of the Turkish Confederation of Businessmen and Industrialists (TUSKON) — which had had a strong presence in African countries — and contributing to the deterioration of already weakened Africa-bound Turkish exports.

Turkish exports to African countries saw a decrease of nearly 3 percent year-on-year in 2014, according to official data. The slide, however, has increased to 18.6 percent in January and 28.3 percent in February compared to a year ago.

The government’s wielding of its power, however, has contributed even more to the losses stemming from falling export volumes with Africa.

”We see a large number of such examples. When the businesspeople who became regular customers of Turkey after many years of diligent effort fail to receive a [Turkish] visa, they go to Dubai, China and even to Europe. Turkey turns those to whom it avoids giving a visa into customers of other countries,” Meral added, underlining that foreign investors and tradespeople are not without alternatives.

Outlining that most Turkish trade with African countries is carried out by TUSKON members, Meral said they have been facing several barriers imposed by the government since 2014.

Since 2005, which the government designated as the Year of Africa to show its ambition to boost trade with the continent, TUSKON has been promoting the improvement of Turkey’s trade ties with Africa and has already conducted a series of meetings to increase commercial relations with African countries.

A nongovernmental and nonprofit umbrella organization for seven business federations, 211 business associations and more than 55,000 entrepreneurs from all over the country, the federation is the most effective business group representing Turkey abroad. It organized 23 World Trade Bridge summits between 2006 and 2014, and around 70,000 businessmen from Turkey and around the world have had the chance to come together and make connections thanks to its events.

However, the federation has not organized domestic or international events as often as before. The government has been accusing faith-based Gülen movement and its supporters of attempting to engineer a coup via investigations since major graft scandals that were made public on Dec. 17 and 25, 2013. TUSKON is known for having ties to the Gülen movement, also known as Hizmet.

Somalia has been struggling with civil war and drought for a long time, and Turkish schools have a special place in rebuilding the education system in the country, despite the fact that these schools were opened only two years ago. Nile Institutions have been active in Somalia for almost two years, but these institutions have achieved 22 medals in the international Olympics.